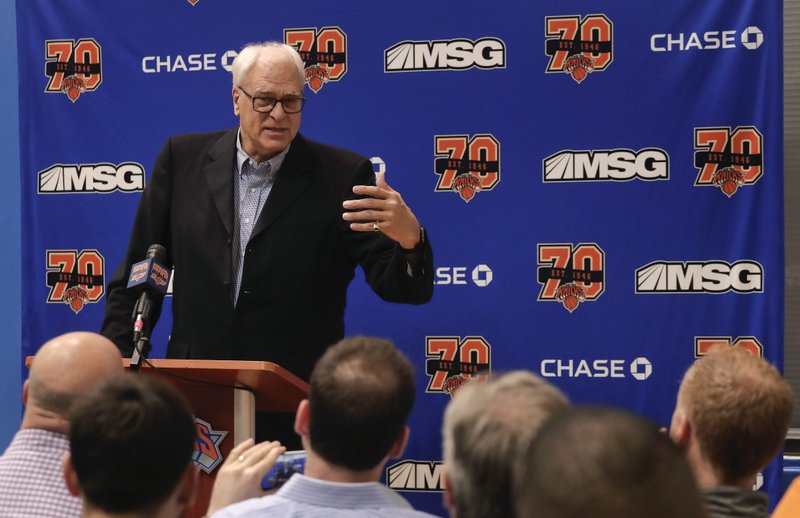 By BRIAN MAHONEY
GREENBURGH, N.Y. (AP) — Phil Jackson thinks Carmelo Anthony and the Knicks might be better off going their separate ways. “We have not been able to win with him on the court at this time and I think the direction with our team is that he is a player that would be better off somewhere else and using his talent somewhere he can win or chase that championship,” Jackson said Friday. Jackson stopped short of saying he wanted to trade his All-Star forward, but certainly seems eager to explore a deal that would help the Knicks get younger and more athletic. “Right now we need players that are really active, can play every single play, defensively and offensively,” Jackson said. “That’s really important for us.” Anthony appeared at Barclays Center later Friday night for the Jordan Brand Classic but spoke only about the game itself, declining to comment on Jackson’s statements before being whisked away.

Melo is here handing out awards at the @JordanClassic pic.twitter.com/BAhnSuYG6c

Melo declined comment on Phil Jackson’s statements today and on the KP thing and was whisked away.

As if the Jackson/Anthony issue weren’t enough, ESPN reported that a frustrated Kristaps Porzingis skipped his exit meeting with the Knicks. Anthony was whisked away as he was asked about Porzingis. Jackson spoke to the local media Friday for the first time since September. The Knicks finished 31-51 in their fourth straight season out of the playoffs. He met with Anthony a day earlier, a meeting he said was cordial. The 32-year-old veteran wants to play for a winning team, and Jackson explained that it may be time for Anthony to go looking for one elsewhere because the Knicks can’t provide it. “We just talked about how we could make things the best possible things for both of us,” Jackson said, “(find) a place where he could go to be competitive and to be back in the hunt, and something that would benefit us moving forward as a young, developing team.” The team’s president of basketball operations says he believes there’s been progress, but signaled he will start another rebuilding of the team, a year after acquiring a number of veterans he hoped would join Anthony in becoming a playoff squad. Moving Anthony will be difficult, given his age and the $54 million remaining on the five-year deal Jackson gave him in 2014. He also granted Anthony a no-trade clause in that contract, but said he doesn’t regret it. “He’s carried the basic load for this team. I thought he stood up well this year in a lot of tough situations. I can’t regret it. I can’t go back and regret that,” Jackson said. “Obviously it hasn’t worked out, this partnership together. Somehow or other it didn’t click here with this team, but he’s done his role and played his role quite well.” Jackson said he warned Anthony after last season the Knicks wouldn’t be able to provide him a winning team, but Anthony opted to stay. The Knicks had trade talks during the season but couldn’t find anything workable, and it was during that time that their relationship suffered, along with the team’s record. “So in our talks this time we talked about how we’re going to go about doing what we have to do,” Jackson said. “We will take into account his consideration. I told him this is not a situation where we’re going to dump you or do anything like that, but we’re looking to improve ourselves however we can.” Jackson said he we would want back a “significant player” to replace Anthony, who remains the Knicks’ leading scorer, and was vague on whether he thought Anthony could return if there was no trade. “That’s a long way down the road, but there’s very few options at that level,” Jackson said. “But there are options.” Other player news: — Jackson said Derrick Rose, whose first season with the Knicks ended with him needing surgery to repair torn knee cartilage, told him he wants to return as a free agent “to have a chance to redeem himself as a player.” — He hopes Joakim Noah can return to form, after the center had knee surgery and may be headed for shoulder surgery this summer. He signed a four-year, $72 million in July. “He expressed his great dedication toward getting back to what he was, or who he is as a basketball player, so I have to trust him on that,” Jackson said. As for Jackson, he painted a picture that’s rosier than reality, saying the Knicks are building a foundation and that fans see progress. As always, he stood firmly behind his belief in the triangle offense, which the Knicks began featuring even more after the All-Star break at Jackson’s insistence after he allowed coach Jeff Hornacek to blend it with his own offensive schemes earlier. The 11-time champion as a coach, most in NBA history, acknowledged that losing as a first-time executive has been difficult. “I never took a jump shot, never made a substitution, but the buck stops here,” Jackson said. Meantime, Anthony responded with an Instagram post: