Kevin Knox Turned Down an Offer to Play in China for $1.4 Million | Zagsblog
Follow @adamzagoria 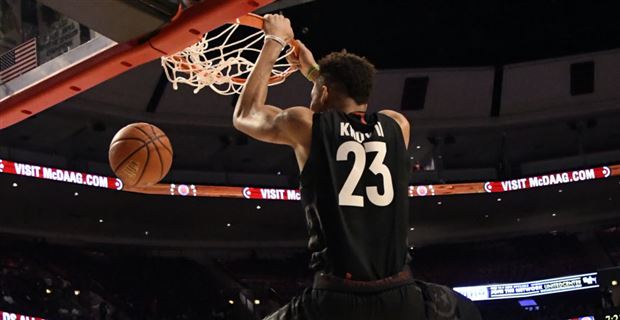 Kevin Knox will spend at least one year on a college campus, but he could have spent that year in China. The 6-foot-8 Knox out of Tampa (FL) Catholic reportedly turned down an offer to play professionally in China next season for $1.4 million. “I didn’t put much stock into the offer,” Kevin Knox Sr. told the Tampa Bay Times. “We politely said thanks but no thanks. He’s going to college.” Knox is considering Duke, North Carolina, Kentucky, Florida State and Missouri, and is coming off a visit to Missouri a week ago. “They came on kind of late. Mike’s been in my ear, Blake’s been in my ear every day so I’ll keep talking to them, talk to the coaches,” Knox said. “I went up there and met with the coaches and everybody so it’s a great visit, I had a lot of fun and we’ll just go from there.” Knox had been projected as a one-and-done by DraftExpress.com, but is not currently listed on their 2018 mock. “That’s written on my bedroom wall, to be a one-and-done,” Knox told the Tampa Bay Times. “A lot of people project that I’ll do that. But it’s not done yet. I still have to work hard for it.”