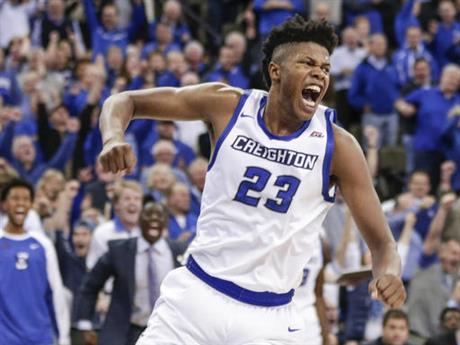 Justin Patton, the 7-foot Creighton freshman big man who was named Big East Freshman of the Year, will declare for the NBA Draft and sign with an agent. Patton is currently projected to go No. 17 in the 2017 NBA Draft by DraftExpress.com.

“I’m all in and this is everything that I’ve wanted,” Patton told The Vertical. “I talked this over with my family and gained a perspective. Whatever I have to do for a team, I’ll do it. I pride myself on going to the gym, working until I tire out and being the best that I can be.

“I’m a really competitive person, so I want to be the first big man taken in the draft. I know not everyone gets this opportunity.”

The 7-footer from Omaha, Neb., averaged 12.9 points, 6.2 rebounds and 1.4 blocks in 35 games this season. He ranked third in the country in field goal percentage with a remarkable 69.3 percent. Along with his national standing, Patton broke the Big East freshman field goal percentage record, connecting 66.3 percent of his shots in league play. Creighton rode the back of their rookie big man on the way to a 25-10 overall record, 10-8 in Big East play, after losing senior guard Maurice Watson Jr. to a torn ACL. They fell to Rhode Island in the first round of the NCAA Tournament. Photo: Nati Harnik Follow Adam Zagoria on Twitter And like ZAGS on Facebook