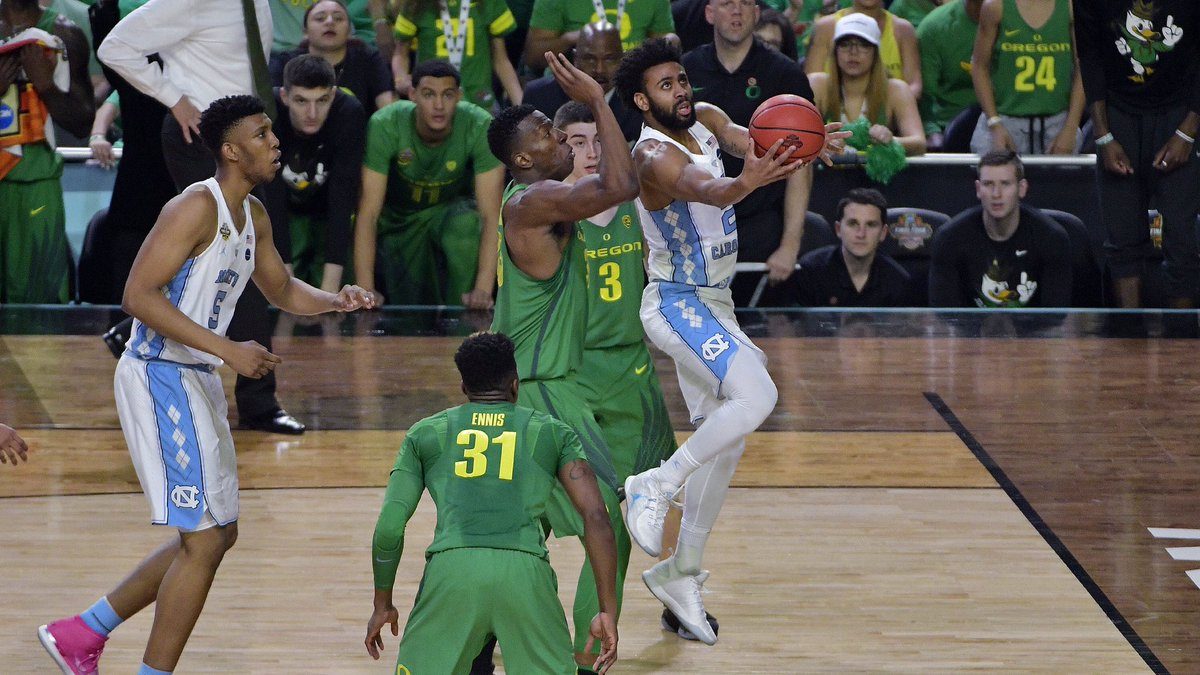 GLENDALE, Ariz. –– North Carolina hasn’t featured a one-and-done player in a decade. Brandan Wright was the last Tar Heel to leave for the NBA after his freshman season….in 2007. During that same time, Duke has had nine one-and-done players, including two this year in Jayson Tatum and Harry Giles, while Kentucky has featured 18 and counting since 2009 under John Calipari. Yet despite that recent track record, North Carolina is back in its second straight NCAA championship game, with a chance to win it all on Monday night against Gonzaga after holding off a gutty Oregon team, 77-76, here at University of Phoenix Stadium. To be sure, North Carolina coach Roy Williams and his staff have recruited players who ended up or will likely end up being one-and-dones in Giles, Brandon Ingram (Duke) and Bam Adebayo (Kentucky). But while missing out on those players, North Carolina has built a veteran team comprised of players like junior Justin Jackson, the reigning ACC Player of the Year who went for 22 points against Oregon, and senior Kennedy Meeks, the big man who went for a season-best 25 points and 14 rebounds. “Well, I think education is important,” Meeks said with a smile. “My family always preaches that to me. So  no, I never thought being one-and-done. I knew that this was going to be a great program for me. Had a great coaching staff that will teach me how to become a man over the course of the four years. And it’s a great outcome, I think. I think I’m a great product from what Coach Williams has started off.” Since the one-and-done rule came into effect in 2016, only two programs — Kentucky in 2012 and Duke in 2015 — have won an NCAA championship with a one-and-done player. Jackson, a McDonald’s All-American who was ranked No. 8 in the Class of 2014 by ESPN.com, said he’s happy to be part of a program that hasn’t featured any one-and-dones of late. “You know, there’s nothing bad about schools that might have a lot of one-and-dones,” he said. “But coming to a place like this, with a coach like Coach, and brothers that you can call family for the rest of your life, you know, there’s nothing better than that. At the end of the day, this is the second Final Four that I’ve been to in my three years, and it’s the second that he’s been to. “And so there’s nothing better than winning. And coming to a place like this where you have family, education, you know, the best of the best when it comes to basketball, I don’t think it can really get much better.” Williams, who can become just the six men’s coach ever to win three NCAA championships, has taken hits in recruiting because of the academic scandal that has trailed his program the last couple of years. That may well have impacted their chances with guys likes Ingram, Giles and Adebayo.

“I’m not the smartest guy in the world, but I know I’m damned sure not the dumbest,” Williams said. “I don’t think there’s one second of that thing [the scandal] that’s been a blessing, not one second. People have tested my credibility, and I haven’t appreciated that. It’s been used against us in recruiting. There’s not one second that I’ve thought that that was a blessing. I wouldn’t wish that on my worst enemy, and I don’t have too many enemies, I think.” Now despite all that, and despite not having a one-and-done in a decade, North Carolina is back to the point where it was a year ago when a Kris Jenkins three-pointer at the buzzer stopped Williams from winning his third championship. “I’m coaching a new group of kids,” Williams said. “And making it back to the national championship game is amazing. Oh, you did it that last year? Well, that still makes it even more amazing kind of thing.”