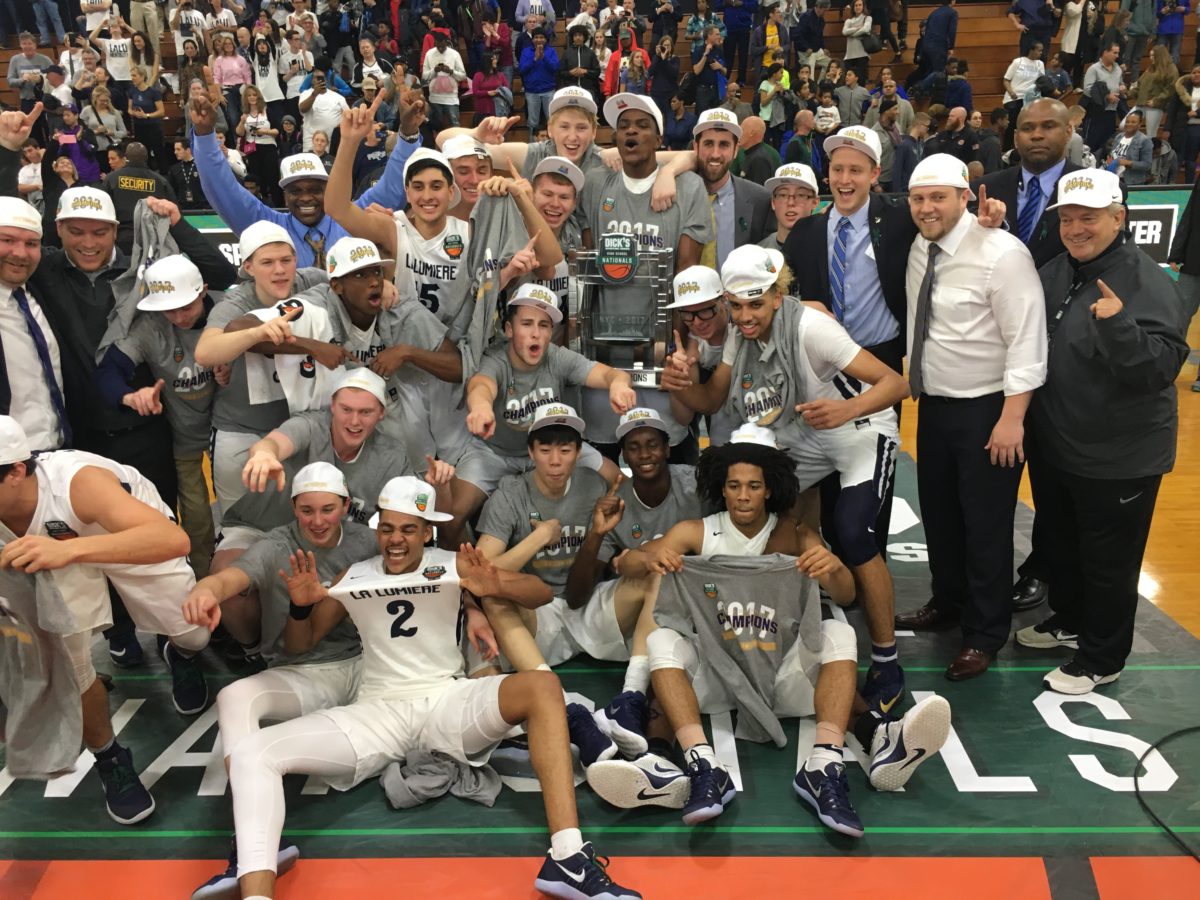 BY CHRIS BARCA NEW YORK — Of all the banners in La Lumiere’s gym, two words on the Indiana school’s most recent one stand out the most to senior Brian Bowen. Runner up. “Every practice, we looked at that,” Bowen said. “We just didn’t want that to happen again.” One year ago this weekend, La Lumiere (IN) was forced to watch Oak Hill Academy (VA) celebrate a Dick’s Nationals championship. But this year, there would be no overtime buzzer beater. No heartbreak. For the Lakers, its quest to avenge last season’s stunning Dick’s Nationals title game defeat is complete. The hero on Saturday was Bowen — No. 12 on ESPN’s Class of 2017 Top 100 — who outdueled Montverde Academy (FL) star sophomore RJ Barrett, leading the Lakers to a 70-52 win and the first Dick’s crown in program history. “Last year, I said, ‘Mark my words, we will be in the national championship next year,'” Bowen told ZAGSBLOG after the game. “It means so much to me to actually come here and win it.” Bowen was held in check in the first half, scoring just six points on 2-9 shooting as Montverde maintained a 28-27 lead at the break. But every time the Lakers needed a clutch bucket or key rebound in the second stanza, the undecided senior was there. His three-pointer to put La Lumiere (29-1) up nine midway through the third quarter capped a 9-0 Lakers run, permanently swinging the momentum in the Indiana squad’s direction. Montverde (26-5) double teamed him on nearly every possession after the triple, but Bowen, who ended with 15 points and seven rebounds, was able to consistently break the pressure to find open teammates like Michigan State recruit Jaren Jackson Jr. and Michigan commit Jordan Poole for huge buckets. “I didn’t want to rush anything, I wanted to take my time,” Bowen said. “Other guys on my team were hitting shots and I just wanted to feed them and keep it going.” Jackson Jr. led all Lakers with 17 points, while Poole contributed 13 points, including huge three pointers to end the third quarter and kick start the fourth. Montverde sophomore RJ Barrett — ESPN’s top-ranked Class of 2019 star — went for a game-high 25 points in the loss, but repeated La Lumiere double teams forced him into multiple off-balance looks and turnovers throughout the second half. Barrett’s back to back buckets with 4:20 left in the game cut the La Lumiere lead to 56-46, but the frustrated guard misfired on his final four shots as the Lakers ended the game on a 14-6 run. “We were able to make things difficult for him,” La Lumiere coach Shane Heirman said after the game. “He’s an amazing player and his ability to get to spots is outstanding, but luckily we were able to make things tough for him.” Bowen was highly complimentary of Barrett, however, saying the sky is the limit for the young Montverde star. “He’s a sophomore, which is just crazy,” he said. “The dude has high, high, high potential. He plays hard all the time on both ends of the floor and he’s truly going to be a great, great player.” When asked about his recruitment, Bowen reiterated he will make his college decision later this month, noting he still wasn’t sure what day he’ll announce. The forward, who was selected to the McDonald’s All-American Game and the Jordan Brand Classic on April 14, has taken officials to all five schools on his list — Arizona, Creighton, Michigan State, North Carolina State and Texas. “I haven’t figured out an actual date yet,” he said, adding each option was still “pretty even” with the others. Regardless of where he goes to college, however, Bowen said Saturday is a feeling he will never forget. “I couldn’t feel any better,” he said. “I wanted to go out on top and that’s what I did. It’s perfect.”