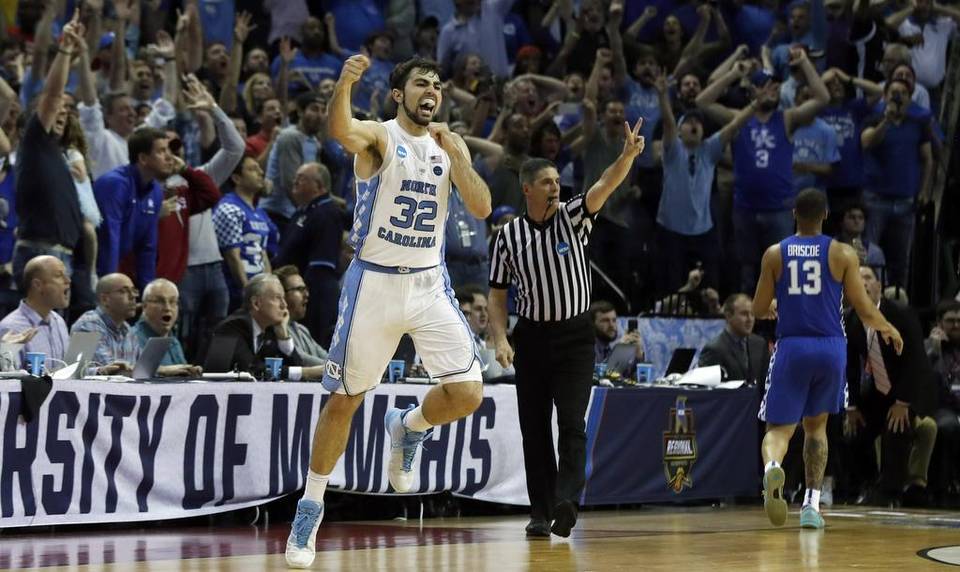 By: MIKE McCURRY North Carolina would not be preparing to play in its 20th Final Four—the most by any program—if not for Luke Maye.   Not only did Maye hit the game-winning jumper against Kentucky on Sunday, one that will go down as one of the more iconic shots in NCAA Tournament history (video below if you somehow haven’t seen it), but the Tar Heels’ eighth-leading scorer has risen to the occasion in March, culminating in a couple of new labels for the 6-foot-8 sophomore: “Big Shot Luke” (per Villanova’s Kris Jenkins) as well as the South Region’s Most Outstanding Player.

ICYMI: The end of North Carolina/Kentucky was incredible. #MarchMadness pic.twitter.com/m1KNEPU6L7

Maye had his coming-out party in Friday’s Sweet 16 win over Butler, posting an at-the-time career-high of 16 points (on 6-of-10 shooting, nonetheless) to go along with 12 rebounds, giving him his first career double-double. Two days later, a new career-high was established, as Maye picked-and-popped his way to 17 points on 6-of-9 shooting against Kentucky. UNC trailed by five points with 5:03 to go before head coach Roy Williams implemented two brilliant adjustments during a timeout: he mixed in some zone looks to throw off the Wildcats down the stretch, and he also subbed in Maye for the ineffective Isaiah Hicks in hopes of a potential jolt to the offense. Both tweaks made by the Hall of Fame coach worked to perfection. Maye made himself a household name in Memphis, the site of his two-game, 33-point outburst, matching his total from UNC’s prior six contests. He also led the Tar Heels to a second consecutive Final Four, where they have an opportunity at redemption following last year’s heartbreaking loss in the national championship. Not too shabby for a kid who originally committed to North Carolina thinking he would have to be a walk-on at first. “I want to be around him when he goes to class this week, so I can see what it’s like,” said Joel Berry. “He basically took us to the Final Four.” Berry didn’t have to wait long. Maye nailed the game-winner a little after 7:00 p.m. on Sunday, only to be in attendance for his 8:00 a.m. class Monday morning.

Here’s the bottom line, though: Maye got North Carolina to Phoenix, the site of this year’s Final Four. But it will be up to the usual suspects to deliver the Tar Heels their sixth national championship, and Williams’ third. That starts with Berry, the primary beneficiary of five days’ rest as the point guard rehabs his two bum ankles. The 6-foot junior was confined to a walking boot all last week to protect his right ankle, which he rolled in UNC’s first-round victory over Texas Southern. He proceeded to twist his left ankle in the first half against Kentucky. It’s also worth noting that he’s connected on just 7 of 32 three-point attempts (22 percent) in six postseason games, including the ACC Tournament. Justin Jackson, too, will have to bring his A-game to the desert. Incredibly, his 101 made threes this year have already set the Tar Heels’ single-season record, but the projected lottery pick (12th overall in this June’s NBA Draft, per Draft Express) missed 10 of 13 triples in Memphis and has converted just 31 percent of his attempts from behind the arc in the last eight games (40 percent prior to this stretch). Up front, look no further than Hicks as an X-factor. The 6-foot-9 senior, who averages 12.1 points and 5.4 boards per night, has collected 22 points and 8 rebounds total in his last three games. Against Kentucky, he didn’t log a single rebound. Williams has an embarrassment of riches at his disposal in the frontcourt, which allows him to insert Maye or Tony Bradley when Hicks in unproductive. Still, UNC needs Hicks to bounce back this weekend if the Tar Heels aspire to cut down the nets at University of Phoenix Stadium. Kennedy Meeks is much more slump-proof—probably due to his absurd offensive rebounding rate—which makes North Carolina’s overall success less contingent upon his offensive performance compared to that of the aforementioned trio. Sure, Meeks scored only 12 combined points versus Butler and Kentucky, but he also took just seven shots. The 6-foot-10 senior posted one of the more dominant 7-point games that we’ll see this year on Sunday, when he snared a career-best 17 boards—his third straight double-digit rebound game—and added four blocks (the 2nd-most of his career).

Kennedy Meeks was a beast on the glass, collecting 17 rebounds. #FinalFour #GoHeels pic.twitter.com/BiyOfwULaF

All in all, the Tar Heels have survived plenty to reach the Final Four. (They’re not alone in that sense, mind you.). Theo Pinson missed the first 16 games with a broken right foot. Kenny Williams succumbed to season-ending right knee surgery. Arkansas led what would have gone down as a second-round stunner by five with under three minutes to play. Kentucky, too, found itself up five in crunch time on the Tar Heels, which picked a bad day to miss 12 of their 15 threes. And let’s not forget Malik Monk’s ridiculous game-tying three-pointer before Maye’s heroics took center stage. In a field that also includes Gonzaga, Oregon, and South Carolina, North Carolina is the slight-to-moderate favorite to win the national championship. Should the Tar Heels be celebrating late into the night come Monday, Luke Maye might have a decent chance of getting excused from his next early lecture. Photo: News & Observer Follow Mike on Twitter Follow Adam Zagoria on Twitter And like ZAGS on Facebook