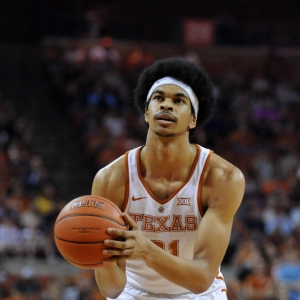 By JACOB POLACHECK Jarrett Allen, the 6-foot-11 freshman forward from the University of Texas will declare himself eligible for the 2017 NBA draft but does not plan to hire an agent per a press release from the school. “I want everyone to know that I am testing the waters with this decision, but I will not be signing with an agent,” Allen said. “Going through this process will allow my family and I to make the best decision possible for my future.

“I had a fantastic year personally here at Texas,” Allen continued. “I had fun and learned so much. I learned that things are going to be tougher than you think, but you have to learn how to respond to adversity. And I’ve matured a lot as a person.”

Allen recorded 12 double-doubles on the season (tied for third-highest total by a UT freshman in school history), including eight in Big 12 Conference play. He also ranked fourth on the UT freshman season chart in total rebounds (278) and fourth in rebounding average (8.4 rpg).