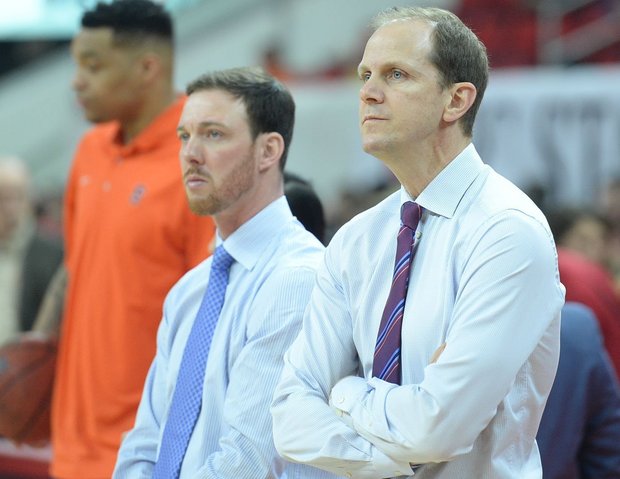 INDIANAPOLIS — Mike Hopkins won’t be waiting on Jim Boeheim any longer. The man named the “head-coach designate” at Syracuse has been hired away by Washington to replace the fired Lorenzo Romar. The school made it official after ESPN’s Jeff Goodman and others reported it. ESPN reported the deal is for six years. “The University of Washington is such a unique place, with a world-class University, an exciting basketball history and unbelievable fan support,” Hopkins said. “Together, I believe we can build something very special in Seattle, and I can’t wait to get started. “I can’t express enough thanks to Coach Boeheim for so many years of mentorship and guidance,” added Hopkins, who had been linked to openings at Charlotte and Oregon State in recent years. “The timing is right for me and my family to make this move.” A Laguna Hills, Calif., native who was a member of the 1987 California state championship team at Mater Dei High School, Hopkins has West Coast ties. He played at Syracuse for Boeheim from 1989-93 and has been on the coaching staff since 1996. Hopkins was due to take over for Boeheim, 72, after the 2017-18 season when Boeheim was set to retire. The school named Hopkins as Boeheim’s successor in 2007, a decade ago. It remains unclear what this means for Boeheim and the Syracuse coaching situation going forward. “I think it means Jim’s staying,” one industry source said. Meantime, Washington had a strong recruiting class set for 2017 that featured 6-foot-10 senior Michael Porter Jr., a projected lottery pick in 2018. However, his father is expected to land at either Missouri or possibly Oklahoma, with Michael and younger brother Jontay Porter expected to follow. Jontay Porter announced this week he had reopened his recruitment. Hopkins had been actively recruiting players for Syracuse, including incoming players Oshae Brissett and Bourama Sidibe, as I wrote in this New York Times piece.

“I guess the difference is that Mike’s now the lead and also on some level the closer,” said Roselle Catholic coach Dave Boff, who has had multiple players recruited by Syracuse, “where it used to be Coach Boeheim would come in towards the end and try to kind of finish the deal off.”

He added: “I think without question the fact that they’ve been open about the transition plan and everybody knows what’s going on makes it much easier for Mike. And the fact that he’s been the lead recruiter for a long period of time anyway, I don’t really think that it has to change all that much.”

Brissett told Syracuse.com that nothing has changed for him.

“I’m not concerned about it, to be honest,” he said.