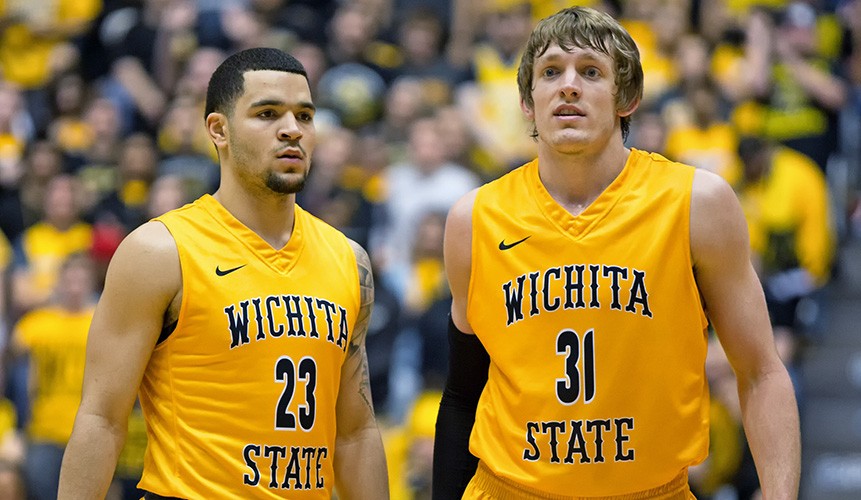 INDIANAPOLIS — Neither Landry Shamet nor any of his Wichita States teammates were ever seriously recruited by Kentucky. “They never talked to me,” Shamet, a 6-foot-4 redshirt freshman guard from Kansas Citym said here ahead of the South Regional second-round game between No. 10 Wichita State and No. 2 Kentucky on Sunday. Shamet ultimately chose the Shockers over Colorado. He did so in part because of Wichita State’s veteran core that included Cleanthony Early, Ron Baker and Fred VanVleet, a group that reached the 2013 Final Four under coach Gregg Marshall before losing to Louisville. “That was a big reason I came here,” Shamet said. “I wanted to play with Ron and Fred, knowing they’re two NBA guards. When you can say that about your program, it’s definitely going to be more attractive to people.” While Kentucky had 24 guys on NBA rosters at the start of this season — more than any other school — Wichita State has recently produced its share of NBA guys despite being a mid-major from the Missouri Valley Conference. Baker stuck with the Knicks this season despite not having a guaranteed contract entering training camp, and is now getting minutes as a backup point guard. VanVleet is also playing backup minutes with the Toronto Raptors. Early was drafted by the Knicks but is now out of the league after suffering a gunshot wound. Meantime, Shamet could be the next NBA guy to come out of Wichita State. “He’s really good,” Kentucky coach John Calipari said. “He’s fearless. He’s not afraid, can shoot it, runs their team. He’s good. He’s a good player.” Still, the type of NBA guys Kentucky produces are different from those Wichita State has generated. “Well, the guys that they bring in are a little more ready made for the NBA with the size, athleticism, and he gets them better, and he gets them prepared for the NBA as well as anyone,” Marshall said of Calipari, whose current team includes three one-and-done projected first-round picks in guards De’Aaron Fox and Malik Monk and forward Bam Adebayo. “Ours take a little more time in the incubator and developing and working with them and developing their bodies and their skill-set and teaching them to play angry….Our guys don’t normally do it in one year or two years. They do it in four years.” Marshall said the NBA teams, including the Knicks, like the fact that his players have learned to do the little things in basketball across their extended college careers. “I think it’s interesting, if you talk to Fred Van Vleet and Ron Baker, those are some of the things that help them stick in the NBA,” he said. “Obviously, they’re great teammates and great, very talented players from a winning program. But they were free agents, and they go to this veterans camp and the coach keeps saying, man, they just keep doing the little things. They check down. If a big guy comes over and tries to block the shot, they come from the perimeter and try to box out the center, who’s left alone. Those are things that, hopefully, our guys learn in our program that not only help us win, but help them be better pros.” This game is a rematch of the 2014 second-round game where Wichita State was the No. 1 seed and Kentucky was the 8. Now things are reversed where Wichita State was probably under-seeded at a 10 while Kentucky is a 2. Marshall showed his players film of that 2014 game — won by Kentucky — and he was struck by how many current NBA guys were in it, from Kentucky’s Andrew and Aaron Harrison to Julius Randle and Willie Cauley-Stein to Wichita State’s guys. That, in turn, should help Wichita State on the recruiting front, where they may not be landing the one-and-dones like Kentucky, but at least Marshall can point to former players in the NBA. “I think we are [making recruiting strides] because you look at Landry Shamet and Markis McDuffie, for instance, those two guys had some big-time offers,” Marshall said. “And they looked at the success that we were having as a program, and then the individuals that were having success, go onto the next level. It takes a while to build that.” As for future NBA players coming out of Wichita State, Marshall said: “We just haven’t had the lottery picks yet but we’re maybe working on that.”

In Potential Final NCAA Tournament, Kentucky's Isaiah Briscoe Wants to Win it All