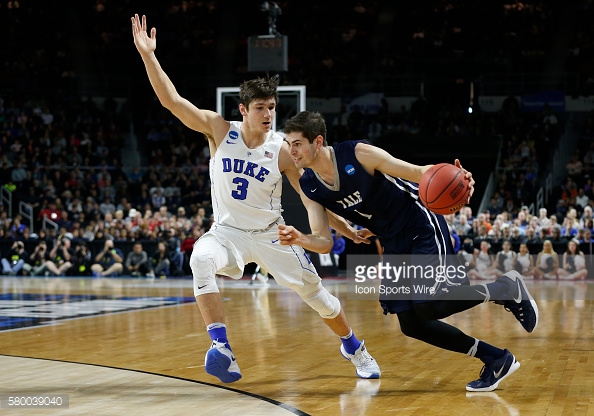 No matter which team wins the inaugural Ivy League Tournament at the Palestra this weekend, Northfield (MA) Mount Hermon will be a winner. The prestigious prep school from the New England Prep School Athletic Council (NEPSAC) has at least one alumnus on each of the four teams in the tournament: Harvard’s Zena Edosomwan (NMH ’13), Yale’s Anthony Dallier (’13), Princeton’s Peter Miller (’13) and the Penn trio of Jackson Donahue (’15), Collin McManus (’15) and AJ Brodeur (’16). “I think it says a ton about the type of program [NMH coach] John [Carroll] has built and the values he looks for in a player and the type of young men he produces there,” Dallier, a 6-foot-6 senior point guard and the Yale captain, said by phone from his hotel room in Philadelphia. “It’s a program that cares both about academics and athletics and I think it shows with the fact of how many guys we have playing this weekend.” Dallier, Edosomwan, Miller and McManus were teammates on the 2013 NMH team that won the National Prep Championship. Miller and Dallier captained that team which also won the 2013 NEPSAC AAA regular season championship. Brodeur was captain of the 2016 NMH team that won the NEPSAC AAA regular season and postseason championship. Now they’re all competing for even bigger stakes: a spot in the NCAA Tournament via the conference’s first-ever postseason tournament. No. 1 Princeton (21-6, 14-0 Ivy League) will have to face No. 4 Penn (13-14, 6-8) on its homecourt in Saturday’s first semifinal at 1:30. No. Harvard (18-9, 10-4) meets No. 3 Yale (17-10, 9-5) at 3:30. Dallier and Edosomwan, who is averaging 7.0 points and 6.1 rebounds for the Crimson, have already renewed acquaintances twice this year so Dallier doesn’t anticipate exchanging too much smack talk with his old friend and teammate. “I’ll probably give him a line or two,” said Dallier, who is averaging 9.5 points, 4.2 assists and 3.7 rebounds for the Bulldogs after taking over the point guard duties when Makai Mason went down with a broken foot. “It’s always good to see those guys on the court and compete against them, it makes it fun.” After Sunday’s championship, it will only be fun for one of the teams. Before this season, Princeton would’ve simply captured the Ivy League’s bid to the NCAA Tournament by virtue of winning the regular-season title. Dallier and Yale did so last year and then went on to stun No. 5-seeded Baylor in the first round before giving Duke all it could handle in a 71-64 loss. This year, Princeton went undefeated in the regular season but could lose in its conference tournament and be denied an at-large bid to the NCAA Tournament. Of course, the tournament gives hope for Penn, Yale and Harvard. “Oh, it’s awesome,” Dallier said of the tournament. “It comes at a great time. Last year we won the regular season and probably would have preferred not to have had [a conference tournament] and then this year finishing in third it gives us the opportunity to still reach our goal of making the [NCAA] Tournament and getting back there, so it’s really exciting.” No matter who wins this weekend, at least one NMH product will be celebrating on Sunday. Follow Adam Zagoria on Twitter And like ZAGS on Facebook

Coach K: Harvard 'Can Beat Anybody'