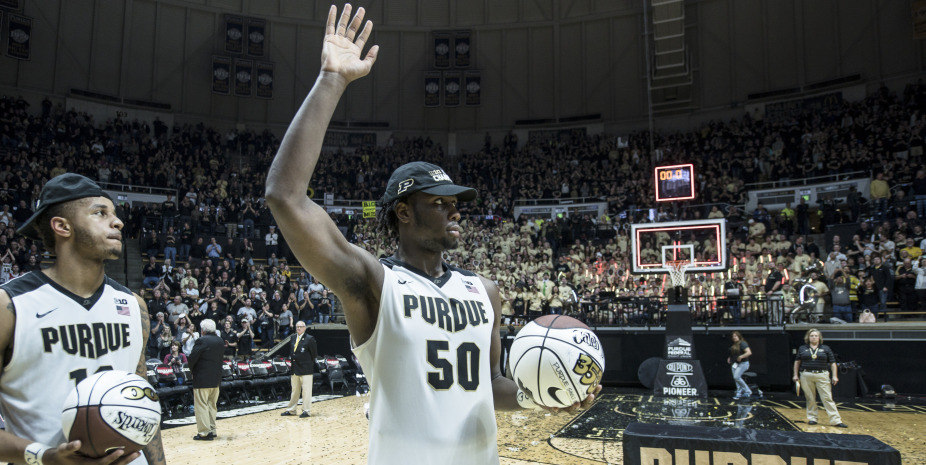 The Big Ten Conference unveiled the men’s basketball All-Conference teams and individual award winners on Monday night. Purdue’s Caleb Swanigan earned Big Ten Player of the Year honors from the conference’s coaches and a media panel, and was a unanimous selection by the coaches. Minnesota’s Richard Pitino claimed Coach of the Year laurels from both the media and his peers. Michigan State’s Miles Bridges picked up Freshman of the Year accolades in both ballots. Minnesota’s Reggie Lynch was named the Defensive Player of the Year and Iowa’s Nicholas Baer was voted the Sixth Man of the Year by the coaches. Swanigan earns the Big Ten Player of the Year award after pacing the conference with 18.9 points and 12.6 rebounds per game in conference games. He became the first player to lead the Big Ten in scoring and rebounds in conference games since Ohio State’s Evan Turner in 2009-10. Swanigan becomes the fourth player in Purdue history to earn Big Ten Player of the Year honors and the first since JaJaun Johnson in 2010-11. Pitino led the Gophers to a double-bye in the Big Ten Tournament with an 11-7 conference record, and a total of 23 wins, which ties the school record. Minnesota, which won eight of its last nine Big Ten games, is the NCAA’s most improved team from the 2015-16 campaign. Pitino becomes the second Minnesota mentor to earn Big Ten Coach of the Year honors and the first since Jim Dutcher in 1981-82. In conference games only, Bridges ranked fifth in the Big Ten in scoring (16.6 ppg), sixth in rebounding (8.1 rpg) and fifth in blocks (1.7 bpg). He has posted seven double-doubles entering the Big Ten Tournament. Bridges, who was named the Big Ten Freshman of the Week five times, becomes the Spartans’ second Freshman of the Year selection and first since Gary Harris in 2012-13.