No. 1 Kansas Storms Back to Beat Oklahoma | Zagsblog
Follow @adamzagoria 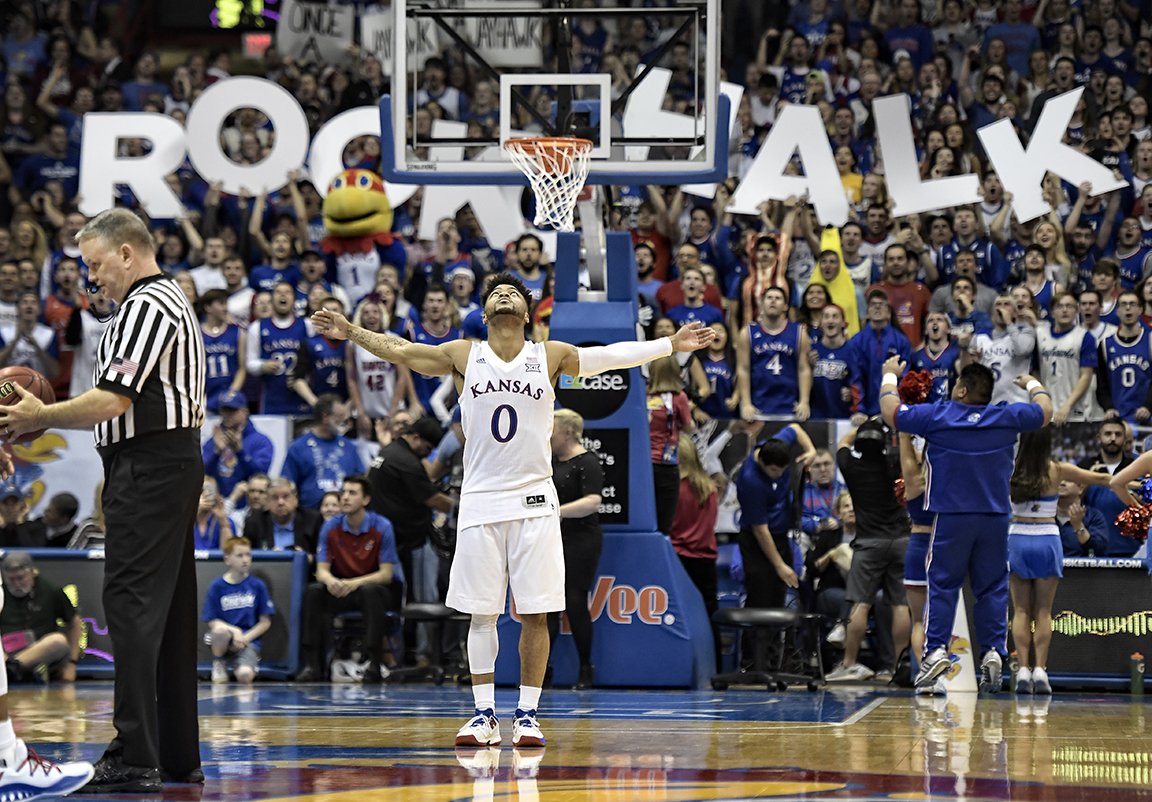 By: MIKE McCURRY For the first 30 minutes on Monday, Kansas looked anything but the nation’s top-ranked team, trailing a 19-loss Oklahoma squad by 12 points with 75 percent of the game completed. The Jayhawks may have been lacking motivation — after all, Bill Self and his guys already had locked up yet another outright Big 12 title — and also could have been distracted by the Senior Night festivities. Still, there was no excuse for letting Oklahoma do what it was doing. To that point, the Sooners were the much tougher team, dictating the paint and crashing the offensive glass. As always, Kansas turned it up when it mattered most, winning 73-63 by ending the game on a 31-9 run. Frank Mason had 23 points, 6 assists, and 3 steals, while Devonte Graham added 16 points, catching fire late via not one, not two, but three three-pointers over a 1 minute, 57-second duration.

Devonte Graham with back to back 3's as Allen Fieldhouse is rocking on Senior Night! #kubball #jayhawks pic.twitter.com/gbPlFY8jyh

The Jayhawks have now won their home finale in each of the last 34 seasons. On this particular night, they prevailed via an offensive explosion that even Steve Alford would drool over. Kansas netted 39 points on its initial 54 trips, resulting in 0.72 points per possession. To put that offensive incompetence into perspective, KU’s worst offensive game of the season came in November win over Georgia, when they posted 0.92 points per trip. The biggest issue early on against Oklahoma was turnovers, which ended a whopping 30 percent (16 turnovers) of those 54 possessions. Landen Lucas (8 points, 8 rebounds, 2 blocks) coughed the ball up with 11:17 to play, at which point you could hear a pin drop at Allen Fieldhouse. That’s when the Jayhawks suddenly became unconscious. They scored 34 points on their final 20 trips down the floor, equating to a 1.7 points per possession mark. For context, consider that UCLA leads the nation this season in points per possession…at 1.2. Kansas could do no wrong, making 10 consecutive field goals at one juncture. Lagerald Vick nailed a few triples. The aforementioned Graham got red-hot. Mason started showing off his polished mid-range arsenal. And KU turned the rock over just three times over that stretch, or 15 percent of the time (half as much as they were before). The Jayhawks hit 13 of their final 15 field goals, all this coming against KenPom’s 32nd-ranked defense in the Oklahoma Sooners. As unsettling as it was to see Kansas being thoroughly outplayed by a rebuilding Oklahoma team for long stretches on Monday, it was equally as impressive for KU to flip the switch and start scoring with layup-line efficiency. It’s a heck of a way for Mason, Lucas, and possibly both Graham and Josh Jackson to culminate their Allen Fieldhouse careers.