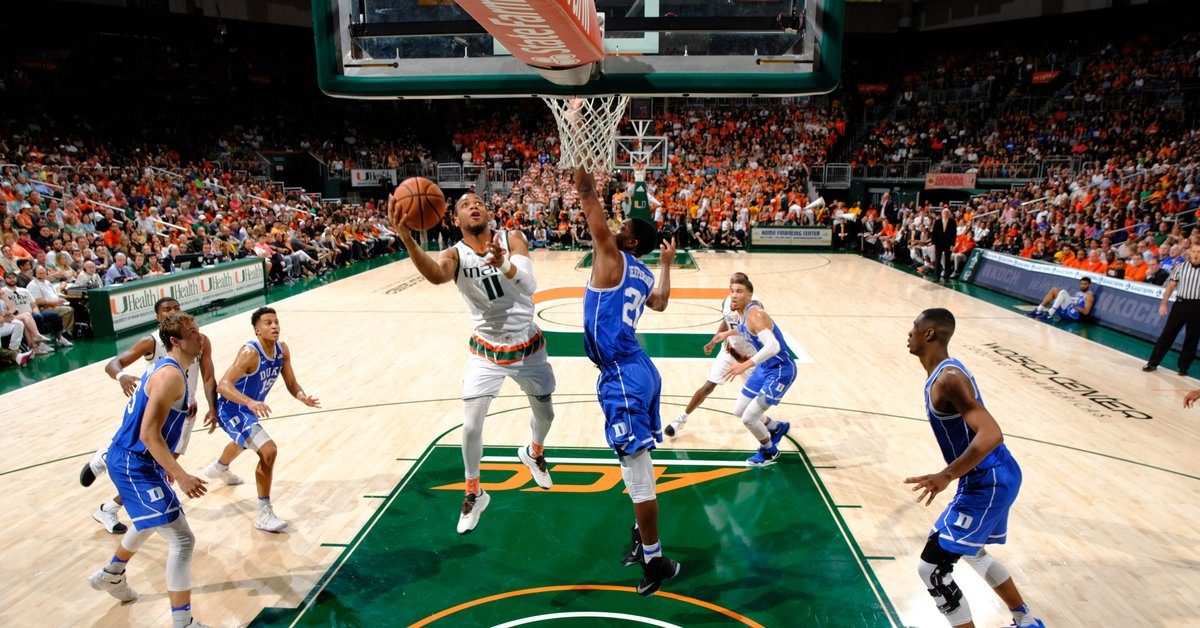 By TIM REYNOLDS CORAL GABLES, Fla. (AP) — For Miami, pregame was all about the seniors. The freshman was the story from there. Freshman Bruce Brown from Vermont Academy scored 25 points, and Miami held No. 10 Duke a staggering 32 points below its season average on the way to beating the ailing Blue Devils 55-50 on Saturday in the Hurricanes’ home regular-season finale. “Growing up, me and my dad used to watch Duke all the time,” Brown said. “I just wanted to come out and perform and help my team win.” That’s precisely what he did. Brown shot 11 for 18 and added four assists, while his seven teammates who got into the game shot just 11 for 40 with four assists combined. Yet that was enough for the Hurricanes (20-8, 10-6 Atlantic Coast Conference), who outscored Duke 40-20 in the paint. Davon Reed had nine points and 10 rebounds in his final Miami home game. “To go out on Senior Day with a win was just an amazing feeling,” Reed said. Frank Jackson and Luke Kennard each scored 16 points for Duke (22-7, 10-6), which lost its second straight to an unranked opponent after falling at Syracuse on Wednesday. Duke was without guard Grayson Allen, the team’s No. 3 scorer at 15 points per game sidelined by a left ankle issue. “We’ve got to get well,” Duke coach Mike Krzyzewski said. “All these games are important, but we’ve got to get him well.” The Blue Devils came into Saturday averaging 82 points on 48 percent shooting. They shot just 32 percent against Miami. Further hampering matters for Duke was Amile Jefferson playing only 5 second-half minutes because of an injury. Decisions on the availability of both Allen and Jefferson for Tuesday’s game with Florida State will likely not be made until game day, Krzyzewski said. “The most important games are going to be played in a couple weeks,” Krzyzewski said. “And we’re going to be there. … We’re going to be one of them. Miami will be one of them.” Miami was up by as many as 10 points in the second half, before Duke went on a 12-2 run to knot the game at 39-all. Reed’s three-point play with 4:14 left put Miami ahead to stay, and the Hurricanes had to hang on in the final minutes. Kennard’s 3-pointer with 5.9 seconds left got Duke within three, but Brown got a dunk on a runout on the next Miami possession to seal the win. Not long after that, Miami fans stormed the court in celebration. “We’ve had some serious growing pains,” Miami coach Jim Larranaga said. “We’ve had some adversity. But they’re finding a way to overcome whatever the obstacles are, especially on the defensive end.” BIG PICTURE Duke: Jefferson tied Andre Dawkins for 10th on Duke’s all-time games list with his 142nd appearance. If he plays Tuesday, he will tie Danny Ferry, Nolan Smith and Quinn Cook for seventh. … Harry Giles made his sixth start of the season. … Krzyzewski remains seven shy of his 1,000th win with the Blue Devils. Miami: It’s the fifth 20-win season for Miami in Larranaga’s six as coach. … Brown scored or had the assist on nine of Miami’s first 11 field goals. … Guard Ja’Quan Newton returned after a three-game suspension for a violation of team rules. … Miami was 1-7 this season in games where it failed to score at least 70 points. SENIORS HONORED Miami paid tribute to seniors Kamari Murphy and Reed in a pregame ceremony before the final home regular-season game. Here’s how young Miami’s roster is: There were twice as many graduating team managers honored during that ceremony than there were players. CELEB WATCH The game brought a sellout crowd, including some celebrities: NBA career 3-point leader and former Miami Heat star Ray Allen greeted CBS analyst and Duke alum Grant Hill at halftime, retired Yankees slugger (and University of Miami trustee) Alex Rodriguez was courtside, and former Florida Gov. Jeb Bush and Heat forward Chris Bosh (a newly signed Turner Sports analyst) also had prime seats. UP NEXT Duke: Hosts No. 19 Florida State on Tuesday. Miami: Visits Virginia Tech on Monday. Photo: Miami Basketball Follow Adam Zagoria on Twitter And like ZAGS on Facebook