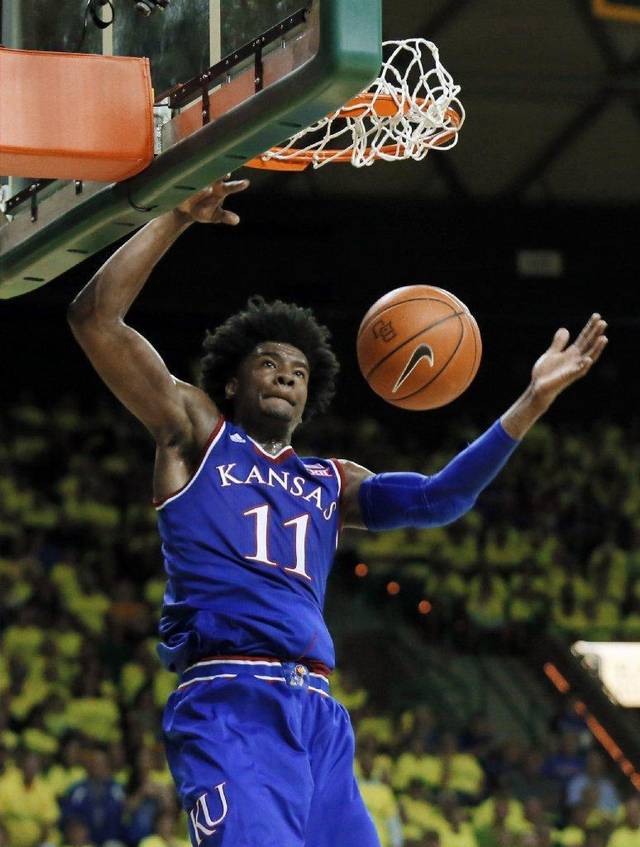 By MIKE McCURRY Kansas star freshman Josh Jackson was charged with one count of criminal property damage in court on Friday, according to a report from The Kansas City Star. The misdemeanor charge stems from an incident on December 9th, when Jackson got into an altercation with a member of KU’s women’s basketball team outside of a bar before allegedly kicking her car multiple times. The victim, redshirt sophomore McKenzie Calvert, happens to be the same female student that Lagerald Vick was found to commit domestic violence against back in 2015. Per the Kansas City Star, which was able to obtain the minute details from the vandalism incident: A news release from [Douglas County District Attorney Charles] Branson’s office details some of what happened in those early morning hours. Calvert reportedly threw a drink on a male patron while leaving the bar. The Star has learned that the patron was Vick. Jackson followed Calvert to her car, according to the release, and they argued. Witnesses saw Jackson kick the driver’s door of Calvert’s car and kick a rear taillight. The Star has learned that Calvert was in the driver’s seat when Jackson kicked her car. Jackson, averaging 16.5 points, 7.1 boards, 3.0 assists, 1.7 steals, and 1.1 blocks per game, is the projected No. 3 pick in the upcoming NBA Draft, per DraftExpress. Friday’s distressing news is just the latest occurrence of a Kansas player finding himself in the news for an off-court legal matter. On Wednesday, guard Devonte’ Graham was arrested for failure to appear in court and subsequently released on bond. Carlton Bragg has been suspended by head coach Bill Self twice this season for unrelated arrests. Furthermore, an investigation into a purported rape at the on-campus dorm that houses the men’s basketball team is still ongoing. The Jayhawks have thus far been able to block out these distractions on the court, as No. 3 Kansas is 25-3 overall and has already locked up at least a share of a 13th consecutive Big 12 regular season title. Kansas visits Texas (10-18, 4-11 Big 12) on Saturday (6:00, ESPN). Photo: AP Follow Mike on Twitter Follow Adam Zagoria on Twitter And like ZAGS on Facebook