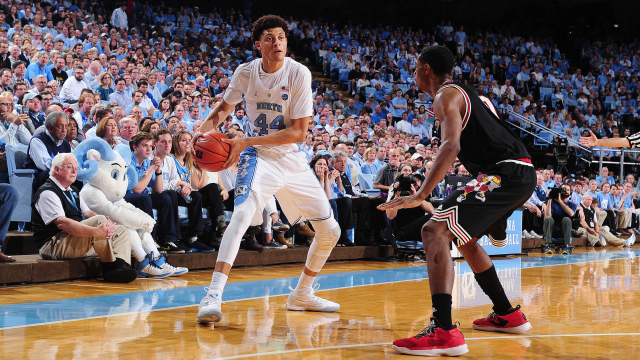 By MIKE McCURRY North Carolina had quite a lot to play for on Wednesday—a pair of postseason one-seeds, to be precise. The No. 8 Tar Heels gained an inside track on both the ACC regular season title, as well as one of the four top seeds in the NCAA Tournament, by virtue of beating No. 7 Louisville, 74-63. Behind 21 points from ACC Player of the Year candidate Justin Jackson, a decisive advantage on the free throw line, and one of their best defensive performances of the season, UNC improved to 12-3 in conference play—a full two games up on the four teams currently tied for second place (Louisville, Duke, Florida State, and Notre Dame) with three to play. The Tar Heels also improved to 15-0 at home this season. In a duel between two Hall of Fame coaches (in which one lost his cool after being heckled by a fan), it was Jackson who stole the show, getting it done in a multitude of ways against Deng Adel and the normally stout Louisville Cardinals defense.

Joel Berry added 15 for UNC, while Kennedy Meeks collected 14 points and 10 boards for his ninth double-double of the year. The Tar Heels made just 36 percent of their shots from inside the arc, overcoming that by going 21-of-29 from the line. Louisville went 4-of-13 at the charity stripe, with the first of those makes not coming until the 7:41 mark of the second half. Donovan Mitchell dropped 21 points on 8-of-15 shooting, whereas his teammates failed to hold up their end of the bargain. U of L shot just 5-of-20 from three and committed 16 turnovers en route to a 0.83 points-per-possession showing, matching their worst Offensive Rating of the 2016-17 campaign. Photo: The Daily Tar Heel Follow Mike on Twitter Follow Adam Zagoria on Twitter And like ZAGS on Facebook