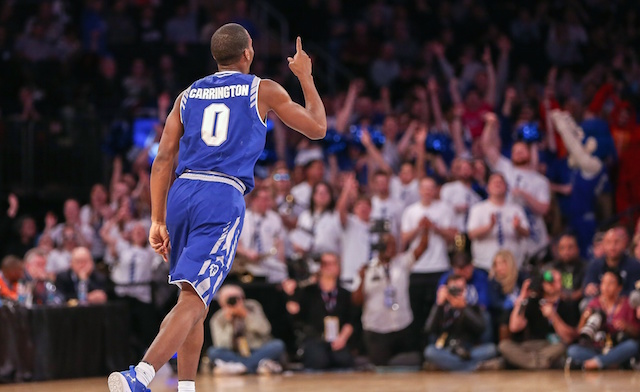 Khadeen Carrington and his Seton Hall teammates made the NCAA Tournament a year ago after stunning Villanova in the Big East Tournament championship game at Madison Square Garden. Now, with another huge game against the No. 2 Wildcats on tap on Saturday, Carrington says the season will be a failure if the Pirates don’t go dancing again. “I would consider it a failure,” Carrington, who is coming off a career-best 41-point outing in Wednesday’s win over Creighton, told me Friday. “I think we definitely have enough strength, enough players. We’re a good team. I think we definitely are a tournament team and we’re just focused on making this last home stretch a good one and making a run to the NCAA.” Some 16,000 fans are expected at Prudential Center for a game where the Pirates will remove the upper-deck curtain to allow for the crowd. The game will be shown nationally on Fox (12:30). The game could not be bigger for Seton Hall (16-9, 6-7 Big East), which is currently slotted among the “Last Four In” by ESPN’s Joe Lunardi — along with Big East rival Marquette, Syracuse and Illinois State. Villanova (25-2, 12-2), meantime, can clinch a share of the Big East regular season title for a fourth straight season with a win. Butler, Xavier and Creighton are chasing Villanova, but all have five losses. “It’s going to be a sellout crowd,” Carrington said. “There’s a lot at stake so we just going to go hard and try to get them back for last time. They beat us pretty bad last time so payback is definitely on our mind.” In the first meeting, Villanova handled Seton Hall, 76-46, at The Pavilion on Jan. 16. Last year at Prudential Center, the Wildcats won, 72-71. The Pirates won, 59-57, in the Big East championship game. “Oh, [a win] would be great,” Carrington said. “I think they’re the best team in the country. A win would probably solidify us [for the NCAAs] or open a lot of eyes. Nobody’s really expecting us to win this game so we’re just going to play hard.” This is the second game in a three-game homestand and the Pirates probably need to go at least 2-1 to keep their NCAA Tournament hopes alive. They host Xavier on Wednesday. Can Carrington keep up his level of play? “Yeah, I definitely can keep it up,” he said. “Just what’s at stake, I’m being more aggressive. We’re a bubble team so every game counts right now. Not that all season the games don’t count, but right now it’s just a little more important.”   RECRUITS EXPECTED FOR GAME Seton Hall is expecting a slew of recruits for this game: Christopher Duarte, Naz Reid, Jalen Carey, Kahlil Whitney, Precious Achiuwa, Noah Farrakhan, Isah Mohamed, Jardin Van Der Korput, Matt Cotton, Darnell Brodie, Al-Amir Dawes, Valdir Manuel, Jordan Walker and Majur Majak. “I mean, there’s always recruits at our game, they’re always watching,” Carrington said. “There’s always recruits there, they know what’s going on.” For our documentary on The Patrick School, “TOC or Bust,” watch here. Follow Adam Zagoria on Twitter And like ZAGS on Facebook