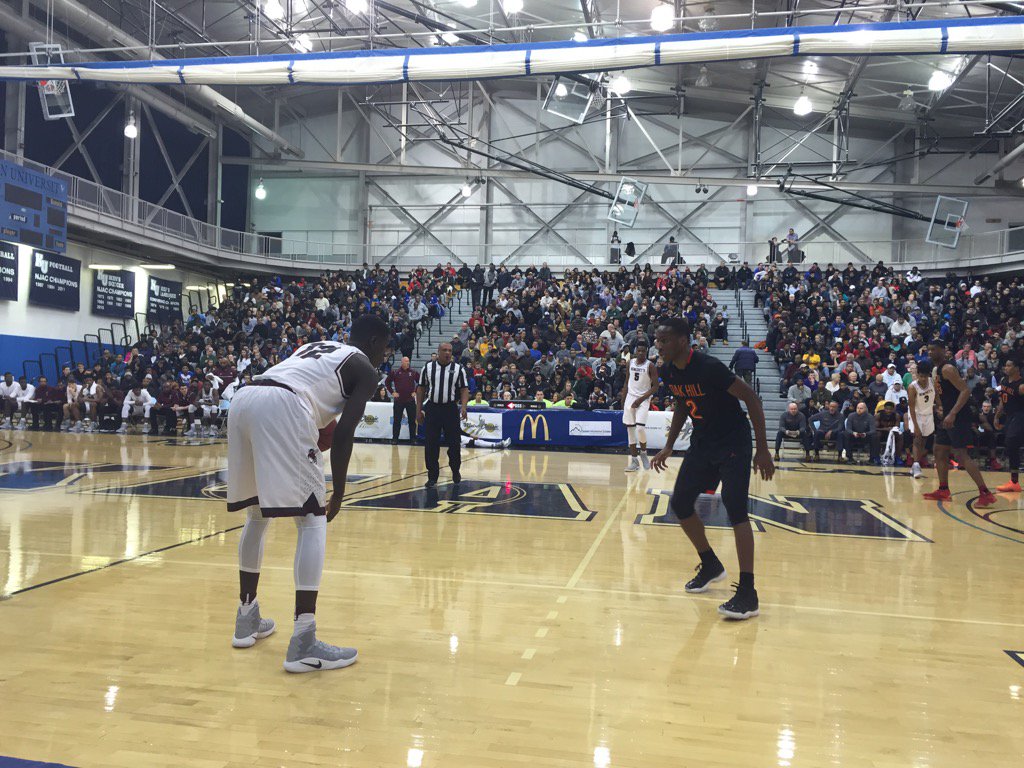 UNION, N.J. — For Coach Mark Taylor and his St. Benedict’s Gray Bees, the entire season is geared toward qualifying for the Dick’s Sporting Goods High School Nationals in New York City. This year’s event is slated for March 30-April 1 at Christ the King High School in Queens. St. Benedict’s took a major step toward qualifying for the tournament for a fifth time by beating national power Oak Hill Academy, 59-47, in the Metro Classic on Saturday night at Kean University. Syracuse-bound big man Bourama Sidibe went for 13 points and 7 rebounds and junior wing Matthue Cotton tallied 10 points and five assists. Among those on hand for the game were Knicks guard Brandon Jennings, an Oak Hill alumnus, and Knicks big man Kyle O’Quinn. Carmelo Anthony, also an Oak Hill product, was rumored to be coming but didn’t make the trip. Oak Hill is ranked No. 7 nationally by USA Today this week. Unranked St. Benedict’s (23-4) has also beaten No. 11 Montverde (FL) Academy, 50-49, in the St. James Invitational in Hagerstown, Md. Montverde beat Roselle (N.J.) Catholic, 63-51, in the final game of the day. “I was saying before the game that if we beat Oak Hill, I think it’s going to be really hard for them to keep us out of the national event just because it’s hard to keep Montverde and Oak Hill out just because they’re so good and we beat both of them in a week,” Taylor said. Said Cotton: “Yes, of course [we should make the Dick’s]. We worked our way into national tournament.” In 2013, led by former Syracuse and current Houston Rockets point guard Tyler Ennis, St. Benedict’s made it to the Dick’s championship game before losing to Montverde on a last second three-pointer. Overall, the Gray Bees are 4-4 all-time at the event. Still, St. Benedict’s must continue to win to help its case. They face Peddie and then possibly Blair Academy in the State Prep A tournament this week. “We gotta beat Peddie and Blair, which justifies everything,” Taylor said. “We’re a very young team. We start a freshman point guard [Noah Farrakhan]. Precious [Achiuwa] is a sophomore. Andre Toure, who played phenomenal tonight, is a sophomore. And even the other guys, Cotton haven’t played a lot at this level. So we’re getting better and better, our poise is better. “But our résumé’s solid. I think we’ve beaten six teams that were in the USA Today Top 25 at some point during the year, so we’ve done what we needed to do. Our issue is we lost some games we shouldn’t have lost but that comes with youth.” FREE THROWS Virginia Tech offered both Cotton and Farrakhan after the game. Cotton also holds offers from St. Bonaventure, Seton Hall and Oklahoma State, and has visited Seton Hall. “I could come in and be an impact player” [at Oklahoma State and Seton Hall],” said Cotton, who runs with Team Final on the Nike EYBL circuit. The 6-foot-5, 200-pound Cotton is a natural two guard, but said he wants to work on his ball-handling to develop into a point guard. And like ZAGS on Facebook