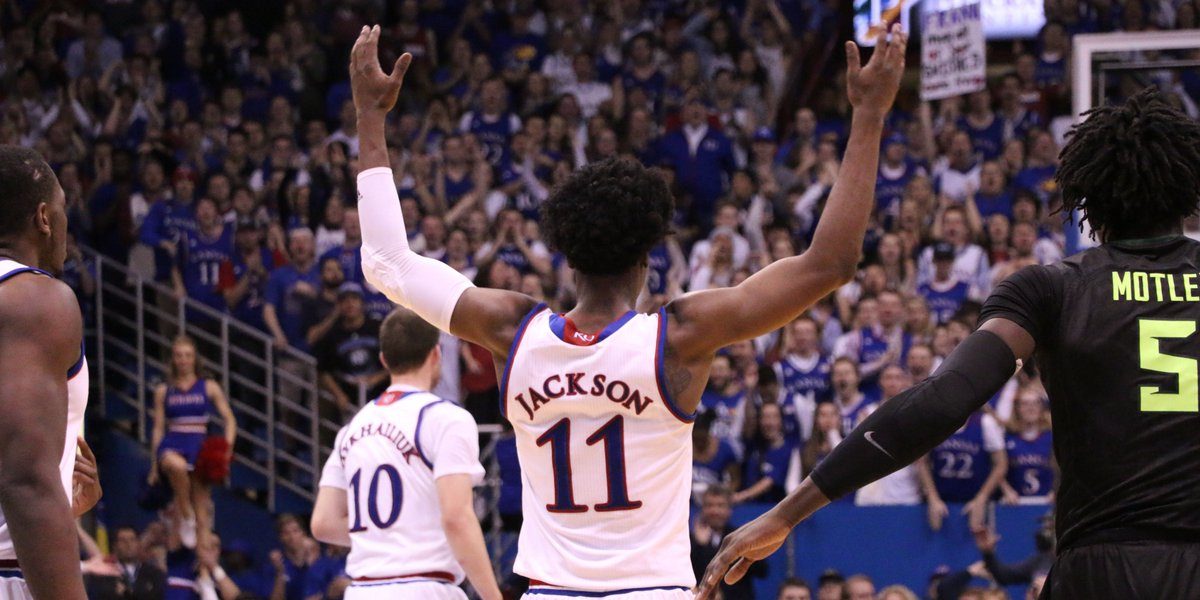 By MIKE McCURRY Baylor’s Scott Drew is a terrific coach. He also happens to be the victim of one of the craziest stats you’ll ever see, after No. 3 Kansas survived No. 2 Baylor on Wednesday via a 73-68 victory. With the loss, Drew is 0-10 at Allen Fieldhouse. Bill Self is 217-9. Josh Jackson dropped a career-high 23 points, adding 10 rebounds for good measure, while Frank Mason scored 15 of his 19 in the second half to lead Kansas to its 54th consecutive home triumph and a ninth straight win over Baylor. Jackson continued his torrid offensive stretch of late, this time in front of 25 NBA scouts. The 6-foot-8 freshman is averaging 21.7 points over his last three contests. “I just feel like everything’s clicking for me, everything’s clicking for our team,” Jackson told ESPN’s Holly Rowe afterward on the telecast. Kansas improves to 8-1 in the Big-12—one step closer to its 13th consecutive conference title—whereas Baylor falls to 7-2 in league play. The Jayhawks have now beaten a pair of (at-the-time) Top-5 teams in a five-day span, as KU impressively won at Kentucky on Saturday. Johnathan Motley had 16 points and 10 rebounds for the Bears, but the All-American candidate inexplicably attempted just one shot in the second half. Manu Lecomte also had 16, with the junior making 4-of-6 from behind the arc. Five-star high school senior Trevon Duval was one of the 16,300 in attendance as part of his official visit. The explosive 6-foot-3 guard out of IMG Academy (FL) has a final five of Kansas, Baylor, Duke, Arizona, and Seton Hall. Photo: @KUHoops Follow Mike on Twitter Follow Adam Zagoria on Twitter And like ZAGS on Facebook

Coach K to Return to Duke Sideline on Saturday