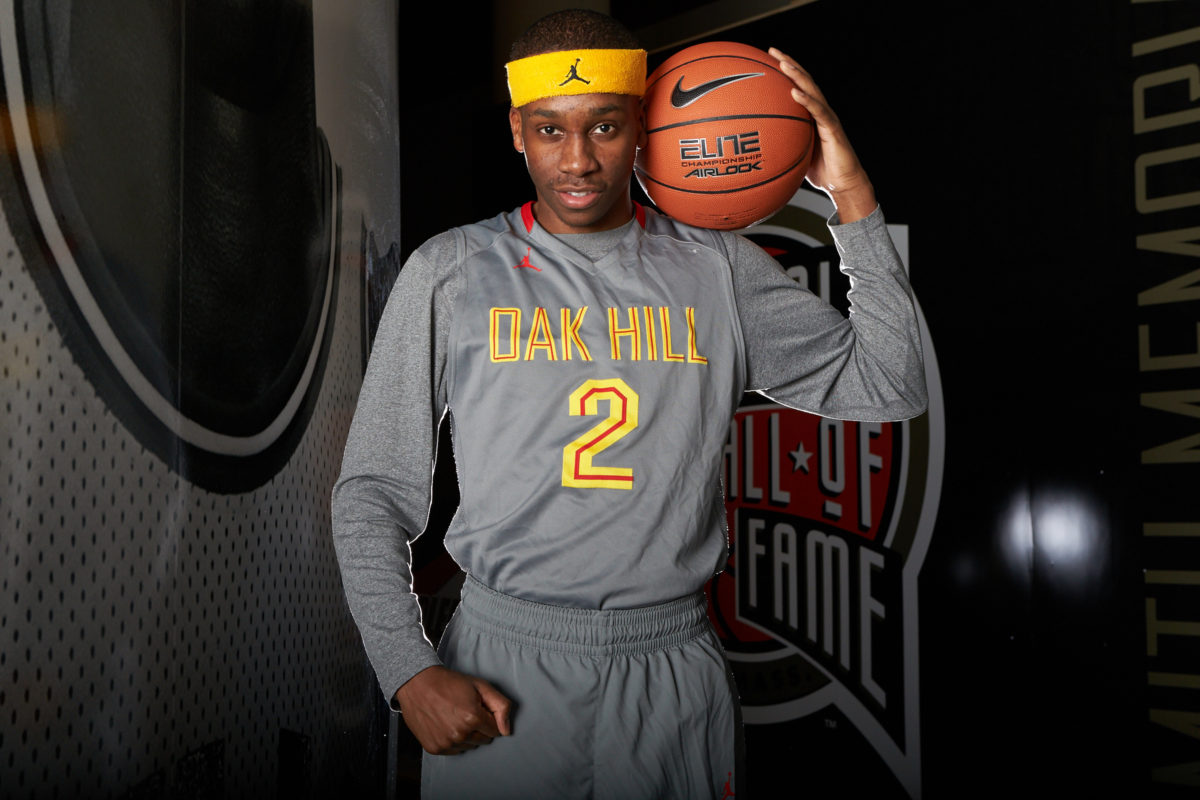 SPRINGFIELD, Mass. — Matt Coleman, the 6-foot-1, 174-pound point guard from Oak Hill (VA) Academy, announced for Texas over Duke on Monday at the Hoophall Classic. Coleman joins shooting guard Jase Febres and power forwards Royce Hamm and Jericho Simms in Coach Shaka Smart’s 2017 class. “It was about watching both teams play, and finding out where I was needed,” Coleman said on ESPNU. “Knowing Shaka’s the coach, he’s a players coach watching them play. Constantly, you’re just hearing, ‘They need a point guard, they need a point guard, things would be different if they had a point guard.’ The way they play up and down, I know the ball is going to be in my hands from day one.”

“Matt is the consummate point guard who teammates love to play with,” Oak Hill coach Steve Smith said. “He’s a pass-first guy who can play in transition or in the half court equally as well. He sees the floor and can make plays for others. I like that he also can score the ball from three or off one- and two-dribble pull-ups. Matt is the ultimate teammate and excels on the court and in the classroom. He carries an A average for his entire high school career.” Coleman won a gold medal on the USA U18 team coached by Smart. He took his official in October. “It was a great experience, having a feel for how he plays,” he said of the U18 team. “He’s a players coach, you know he wants the best for his players, and he only wants you to be as good as you can be.” Coleman said he plans to try to recruit 6-11 Mohamed Bamba and 6-8 Brian Bowen — two uncommitted McDonald’s All-Americans — to join him. Bamba and Coleman took their official visit to Texas together in October. “I’m working real hard,” he told me. “I’m working on Mo and Brian Bowen a lot. Trying to squeeze Kevin Knox in there if I can.” Bowen, meantime, said Coleman is in his ear about Texas, while Arizona commit DeAndre Ayton wants him to come to the West Coast. Coleman isn’t alone in trying to sway Bamba, either. Kentucky-bound point guard Quade Green is working on bringing Bamba to the Bluegrass, and Wendell Carter said he wants Bamba and Knox at Duke. “Yeah, yeah, so I know, we all good guys, but I got an upper hand on Mo, I think,” Coleman said. As for being left off the McDonald’s All-American, Coleman said he felt slighted. “It should’ve been me,” he said. “I really think I should’ve been McDonald’s. Even my fellow guys like Mike [Porter], Mo, Quade, Trey Duval, they said they were having a protest, they were going to get Matt in this game. So hopefully they pull through with that.” Coleman’s pledge leaves Trae Young and Trevon Duval as the top uncommitted point guards in the Class of 2017. Young is considering Kansas, Oklahoma, Oklahoma State and Kentucky, while Duval is down to Duke, Kansas, Arizona, Seton Hall and Baylor. Duval said here that he still hears from Duke and will soon take visits. Meantime, Smart got his man in Coleman. “He said, ‘Matt, the keys are yours to lead us to a national championship,'” Coleman said. “I said, ‘I got you.'” And like ZAGS on Facebook