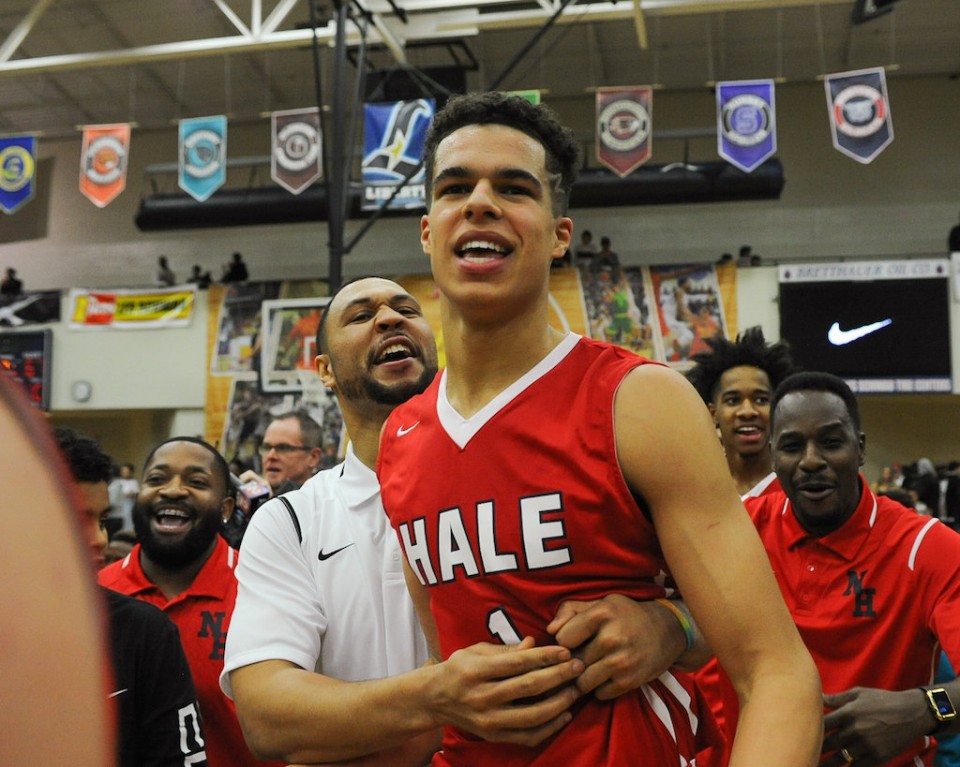 Washington-bound forward Michael Porter Jr. went for 27 points, 15 rebounds, four steals, three assists and a block and was named Most Valuable Player of the Les Schwab Invitational in Portland, Ore., after leading Nathan Hale (WA) High School to the championship on Friday night. “We knew it was going to be a game of runs, and we knew when we got punched in the mouth, we had to punch right back,” Porter told The Oregonian after his team beat Sierra Canyon (CA), 67-65. “I’m just so proud of my team for not quitting.” Marvin Bagley III was named tournament Most Valuable Player after finishing with 22 points and 10 boards for Sierra Canyon while UCLA-bound forward Cody Riley had 13. The 6-foot-11 Bagley is considering Arizona State, Arizona, Duke, Kentucky, UCLA, and Oregon. He is the projected No. 1 pick in the 2018 NBA Draft, per DraftExpress.com. Nathan Hale is coached by former Portland Trail Blazers star Brandon Roy, who was coaching his biggest game yet in the town in which he played pro ball. “I want to make sure [Porter] knows that I’m there to support him, I’m in the fight with him,” Roy said. “He’s an unbelievable player. There’s so many things he can do on the basketball court that you don’t have to coach. So I have let him play, jump in there at times and help him, but just try to do what’s best for the team. That’s what I tell him every day, do what’s best for the team, and the cream always rises to the top.”

Fabulous all-around performance by tournament MOP @TheMPJ1 | Behind every great player is a great team. Porter has that at Hale. pic.twitter.com/DDrsVLxOnw

ZION WILLIAMSON SCORES 31, WINS MVP AT FARM BUREAU INSURANCE CLASSIC Zion Williamson, the 6-7 small forward from Spartanburg Day (SC) High School, finished with a double-double Friday, as the Spartanburg Day Griffins fell to Newton (SC) High School, 73-64, in the final of the Farm Bureau Insurance Classic in South Carolina. Williamson finished the game with 31 points and 14 rebounds, with Kentucky’s Joel Justus watching him. Kentucky was also there to watch 6-4 Class of 2019 point guard Ashton Hagans.  Williamson, who averaged 36 points and 14 rebounds while shooting 76 percent from the field in the tournament, was named the MVP of the Bojangles Bracket.

DEVON DOTSON SCORES 23, PROVIDENCE DAY DEFEATS SUNRISE CHRISTIAN Devon Dotson, the 6-2 Class of 2018 point guard from Providence Day (N.C.) School, went for 23 points and seven rebounds on Friday en route to a 39-37 victory over Sunrise Christian (KS) Academy in the championship game of the Hoodie’s House Tournament. With Florida head coach Mike White on hand, Dotson went 8-for-17 from the field and was named Hoodie’s House Tournament MVP. Dotson went for 37 points, six assists and five rebounds in the semifinals.