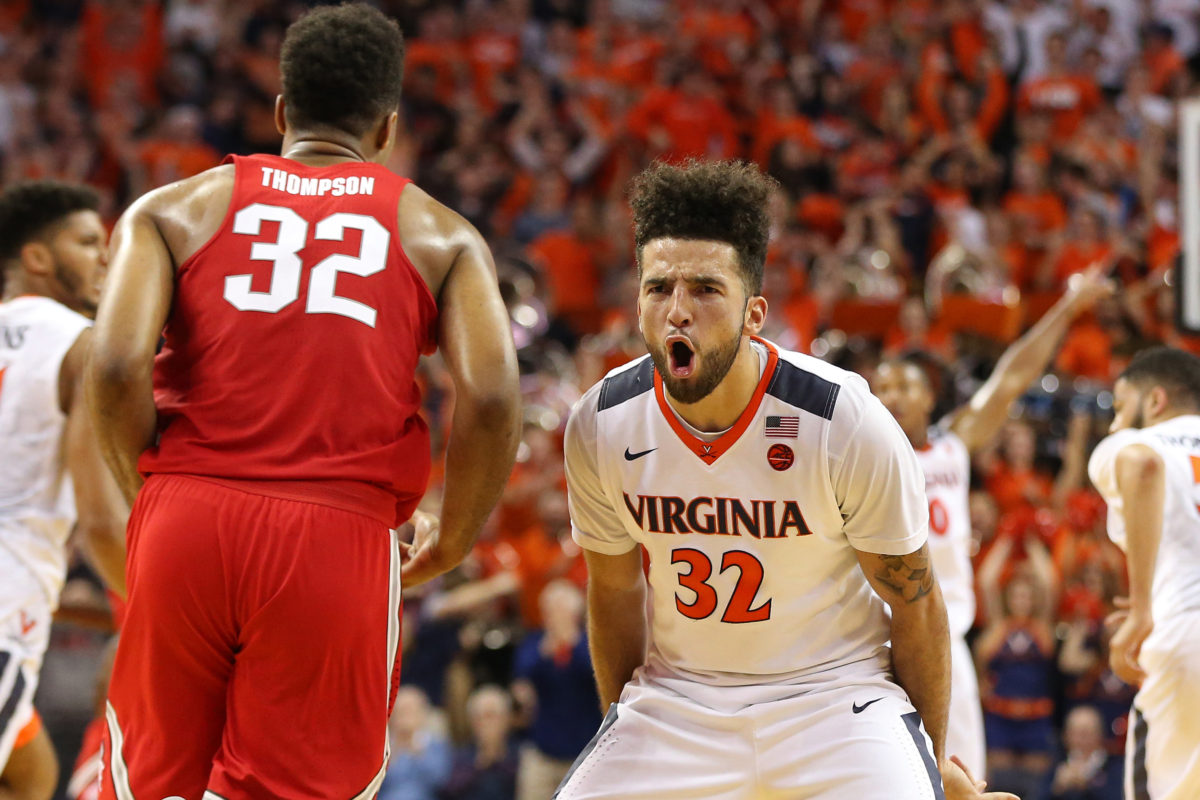 By HANK KURZ Jr. CHARLOTTESVILLE, Va. (AP) — London Perrantes knew he wasn’t playing well, and if he had any doubt whatsoever, coach Tony Bennett let him know. “I got after him,” Bennett said Wednesday night after Perrantes scored 15 of his 19 points in the second half and No. 7 Virginia overcame a sloppy performance and rallied past Ohio State 63-61 on Wednesday night in the ACC/Big Ten Challenge. “I did, and he responded.” Perrantes, who had three turnovers by halftime, hit three 3-pointers in the second half to spark the Cavaliers’ surge. “I knew I wasn’t playing to the best of my ability or even anywhere close,” the senior point guard and four-year starter said. “I’m glad he kind of got into me. That’s the most I got ripped by him since I’ve been here and it sparked us all.” Devon Hall added 12 points for the Cavaliers (7-0), who trailed by as many as 16 points in the first half and didn’t take the lead for good until Marial Shayok’s baseline runner made it 59-57 with 1:58 remaining. The Buckeyes (6-1) trailed 63-61 when Shayok missed two free throws with 10.5 seconds left. Coach Thad Matta called a timeout with 6.5 seconds to play, but JaQuan Lyle couldn’t find an open teammate as the clock ran down and launched a 3-point try that missed badly. “I hope we take a lot from it because I told them after the game, ‘We’re close, but we’re not there yet,'” Matta said. As the Cavaliers rallied in the second half and the crowd whipped into a frenzy, the Buckeyes hurt their chances with 11 of their season-high 20 turnovers, some of them more caused by carelessness than pressure from Virginia, and they almost all proved costly. “As great teams do, they capitalized on every mistake we made down the stretch,” Matta said. Jae’Sean Tate led Ohio State with 14 points and Lyle had 12. BIG PICTURE Ohio State: The Buckeyes are knocking on the door of the Top 25 with only one senior on their roster in forward Marc Loving, their third-leading scorer. Matta has lots to work with, especially in Tate, an athletic, and impressive sophomores C.J. Jackson and Lyle, and win or lose, tight games in packed arenas like John Paul Jones Arena can only help Ohio State as it moved toward play in the rugged Big Ten. Virginia: It’s when outside shots aren’t falling that the Cavaliers will most miss forward Austin Nichols, a transfer from Memphis who was eligible this season, but was kicked off the team after the second game for a violation of team rules. Nichols was not only a gifted inside scorer, but a rebounder and rim-protector on defense and when the Buckeyes drove mercilessly to the basket in the first half, Virginia had no answer, getting outscored 22-4 in the paint in the half. Virginia closed the margin after the break, and finished trailed 32-18 in the paint. SPARKPLUG The Buckeyes’ Jackson found his stroke, hitting three 3-pointers in four tries. He came into the game 1 of 11 from beyond the arc. UNSUNG HERO Virginia’s Darius Thompson scored just four points, but both baskets came during an 11-0 run to begin the second half, turning a 36-24 halftime deficit into a 36-35 Buckeyes’ lead. Thompson finished with three rebounds, three assists, three blocks and two steals. HE SAID IT “I told him, ‘Last year it was Brogdon. This year it’s you.'” — Matta on a postgame exchange with Perrantes, the Cavaliers unquestioned leader who has assumed the role occupied last season by Malcolm Brogdon, now with the Milwaukee Bucks in the NBA. UP NEXT Ohio State returns home to face Fairleigh Dickinson on Saturday and then Florida Atlantic before playing host to Connecticut next Saturday. Virginia faces its third Power Five conference school in four games when No. 25 West Virginia visits John Paul Jones Arena on Saturday. (AP Photo/Steve Helber) And like ZAGS on Facebook