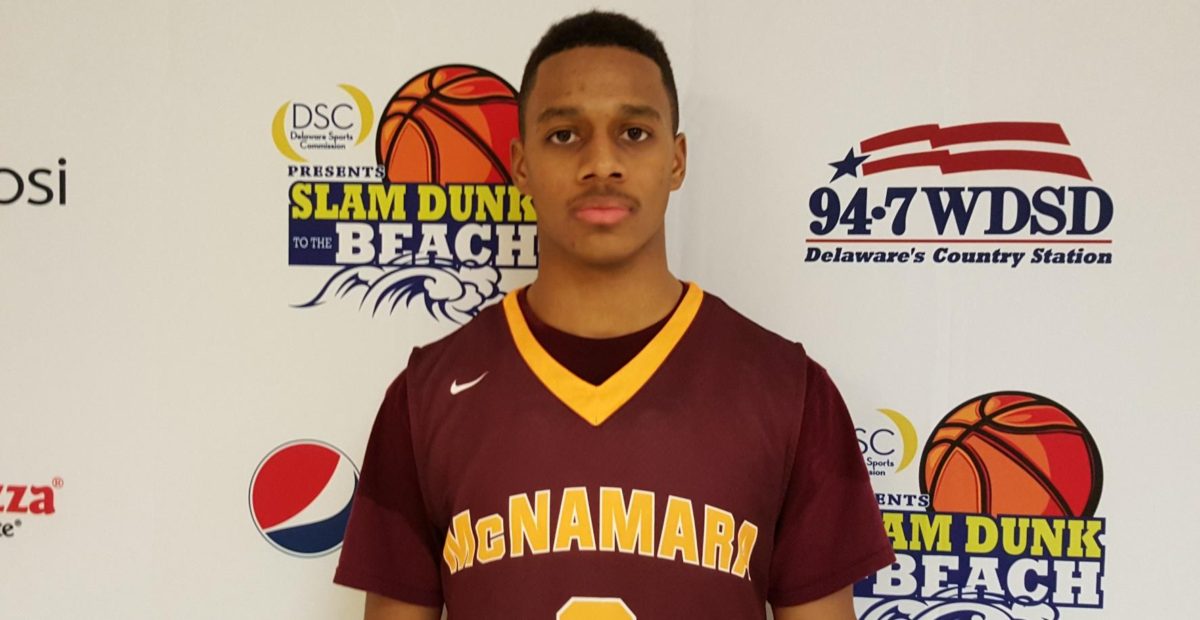 Jamir Moultrie, a Class of 2017 point guard out of District Heights (MD) Bishop McNamara, is focusing on three schools and is targeting a decision next month, his father said. The 6-foot-1, 175-pound Moultrie is focusing on Georgia, La Salle and Monmouth, where he took an official visit this past weekend, and could decide soon after his Oct. 14 official visit to Georgia. “That’s their homecoming weekend so we’ll go down and visit for that and hopefully not too long after that we’ll make a decision,” Jeran Moultrie said by phone. “Things kind of boil down right now to La Salle, Monmouth and Georgia.” Moultrie visited Monmouth officially this past weekend. The Hawks are in the market for a point guard after St. Anthony’s senior R.J. Cole surprised many by picking Howard over Monmouth. “He really enjoyed it, he said it was really nice,” Jeran said of his son’s trip to Monmouth. “It opened up his eyes to some things. We had taken an unofficial up there a few months back but at that time no kids were on campus. This time we were able to see the school in full effect, the campus life as well as the facilities so I thought it was a really cool visit. I enjoyed it.” Monmouth missed out on the NCAA Tournament last year when many thought they deserved an at large. “No doubt, they got robbed,” Moultrie’s dad said. “It’s a shame but it made them hungrier.” Still, their upward trajectory is appealing to recruits. “Yeah, definitely,” he said. “I think Monmouth is on the right path. Last year’s success with the team they had, watching them workout they look really good. And from the coaching staff, they seem to think they’re a little bit stronger than they were last year.” Meantime, La Salle is also in the mix. “They’re a wonderfull staff as well,” he said. “They’re coming off a not so great last year but they’re looking a little stronger. They had to take some lumps but this year they kind of re-loaded and are one of the better teams in the A-10.” Georgia will get its chance on the weekend of Oct. 14. “They’ve come in kind of late but they’ve been pretty active with Coach [Jonas] Hayes coming in to see him pretty much every week,” Jeran said. “Coach [Mark] Fox came up once. They basically need a point guard and they’re looking for a scoring point guard, which kind of fits Jamir’s game. “They saw him originally in Spartanburg against Darius Perry, and they were recruiting Darius Perry but obviously he committed to Louisville.” So a decision could come soon after that visit. “Hopefully, within a matter of days,” he said. “Originally our time to commit was Oct. 1 but with Georgia coming in late and wanting to get him on campus we thought it would be a good opportunity to at least take a look at what they have to offer. I wouldn’t suspect it would be too much longer after we visit Georgia. Within a few days after the Georgia visit.” UNC-Charlotte, Seton Hall and Georgetown are also interested but Moultrie is basically focusing on the above three schools. “UNC-Charlotte has come in kind of late,” he said. “I don’t know if they’re going to get us on campus before that Georgia Visit. And Seton Hall and Georgetown are interested, but we definitely don’t want to push it any longer than we have to.” Follow Adam Zagoria on Twitter And like ZAGS on Facebook