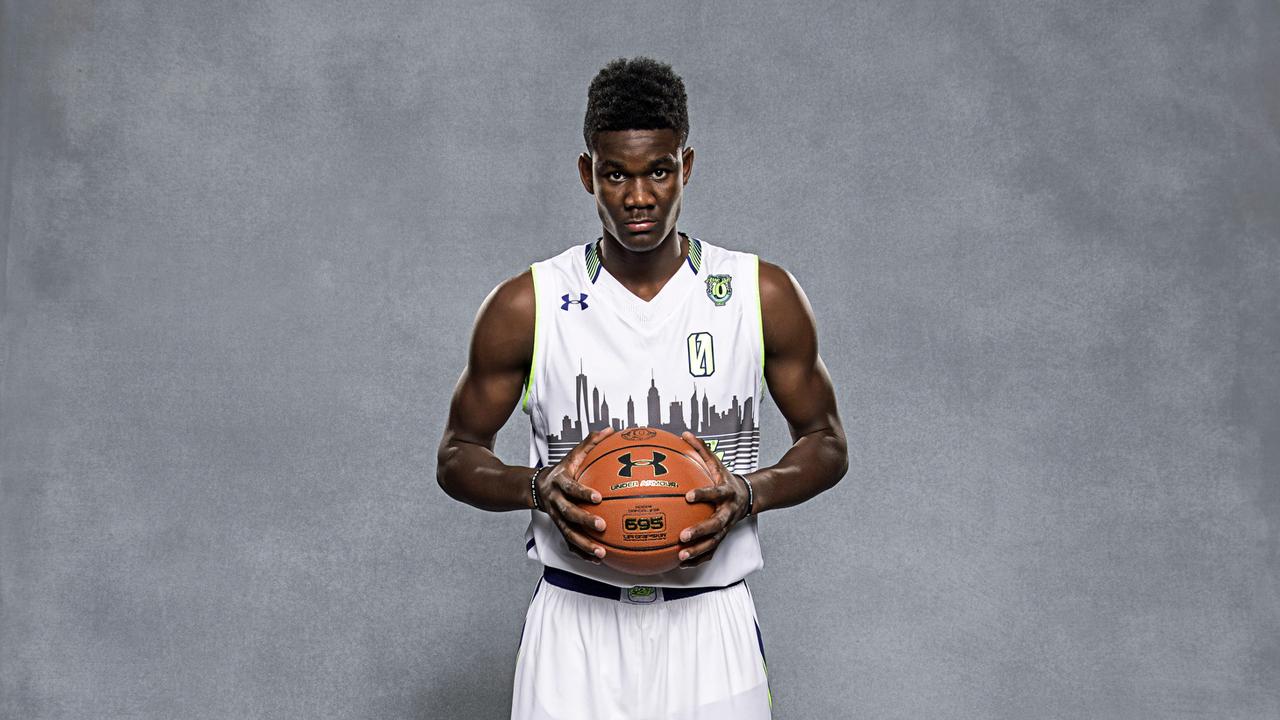 DeAndre Ayton, the 7-footer projected as the potential No. 1 pick in the 2018 NBA Draft, verbally committed to Arizona on Tuesday evening’s edition of SportsCenter. Ayton, a native of the Bahamas who plays for Hillcrest Prep (AZ), also considered Kentucky and Kansas. Arizona has never produced a No. 1 pick in the NBA Draft, only Mike Bibby and Derrick Williams as No. 2s. “I made Arizona home going to Hillcrest Prep,” he said on ESPN. “My family and I can benefit by going to my games. Coach [Joe] Pasternack and Sean Miller, we really trust those guys and I know they can help me get to the next level.” Ayton compared his game to an NBA legend’s. “I compare my game after Kevin Garnett,” he said. “I can feel Kevin Garnett’s energy when I watch film.” There has been widespread speculation about Ayton’s college eligibility and it remains unclear if he will ever set foot on Arizona’s campus. But he said there was no chance of him skipping college to play pro next season. “No, none at all,” he said. “My family said college is a must.” Ayton this summer told Gary Parrish of CBSSports.com that he was taking multiple online courses — including “Pre-Calculus and English” — in order to be “on track” to meet the NCAA’s minimum requirements for freshman eligibility. Amid all this hoopla, Ayton looks like he could step into an NBA game and play 10-15 minutes at the center position tonight. Or at least when the regular season starts in the fall. His fellow Bahamian, former Oklahoma star Buddy Hield, said as much at the Final Four. “He’s special right now,” Hield told me in Houston. “I think he’s good for the NBA now. His physical talents he can rebound the ball. He’s just a talent, man. You just can’t teach height.” As things now stand, he’s in the mix as the No. 1 overall pick in 2018. “Ayton is in the mix for that top spot but right now it’s too early to say definitively who goes No. 1,” Jonathan Givony of DraftExpress.com said Tuesday. “There are a number of guys who look like candidates.” One veteran NBA scout said Ayton needed to improve his work ethic going forward. “Right now going into 2018 he will be in the discussion for a Top 5 selection but his game and approach have to drastically improve,” the scout said. “He is very immature and his games currently reflects that. He is a talent but he needs to grow up physically, emotionally and mentally with his overall game.” The one-and-done rule being what it is, Ayton can’t go to the NBA until 2018, meaning he needs to spend next year at Arizona or playing professionally somewhere. Ayton this summer said more and more high school players were considering going straight to the pros, via overseas or another route but that “My mom wants me to go to college so I have to go.” “I think if a college kid could leave and make $100,000 while playing in an NBA system to prepare them, then it could certainly be enticing,” Chris Reichert, the Editor in Chief for Upside & Motor (upsidemotor.com), told SNY.tv.. “To date the league has only seen NCAA kids in trouble (i.e,.: P.J. Hairston, Rysheed Jordan, etc) leave to sign with them but more money can always change things.” Ayton tends to agree. “Yeah, a lot of kids are very unfortunate,” he said. “They want the easy way out. They want the best opportunity. If that doors open they’re going to take it.” Asked if helping their families was a factor, he said, “That’s the big motivation out here right now.”