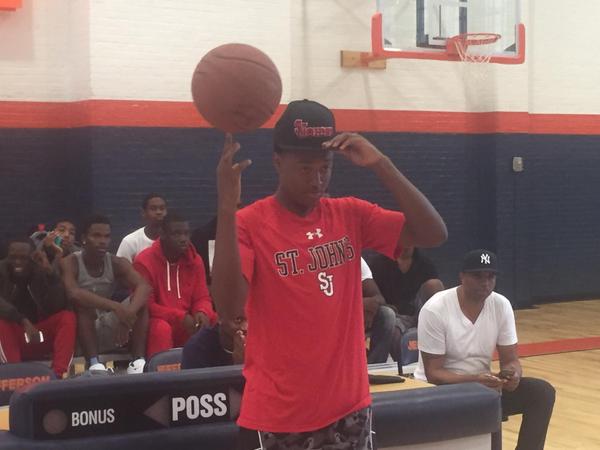 NEW YORK — When Chris Mullin first took the St. John’s job, he vowed to try to keep New York City’s best players at its Big East school. “I think it’s really important that we dominate New York,” Mullin said in April. “If there’s a good player in New York City he needs to come to St John’s if he wants to play the best basketball.” On Tuesday afternoon, Mullin and his staff got New York City’s best senior when Shamorie Ponds, a 6-foot-1 guard out of Brooklyn Thomas Jefferson, committed to St. John’s in his high school gym. “I’ll be attending St. John’s,” Ponds said in front of a packed house. Ranked the No. 8 combo guard in the Class of 2016 by 247Sports.com, Ponds also considered Providence and Creighton. But after Providence landed point guard Maliek White on Sunday, all signs pointed to Ponds picking the Johnnies. Ponds actually said he decided on St. John’s last week, while his father Shawn said the decision came on Monday. Ponds is the highest rated prospect to pick St. John’s since Maurice Harkless in 2011. The Johnnies previously missed out on big-time New York prospects like Sylven Landesberg, Lance Stephenson, Kemba Walker and Chris McCullough. 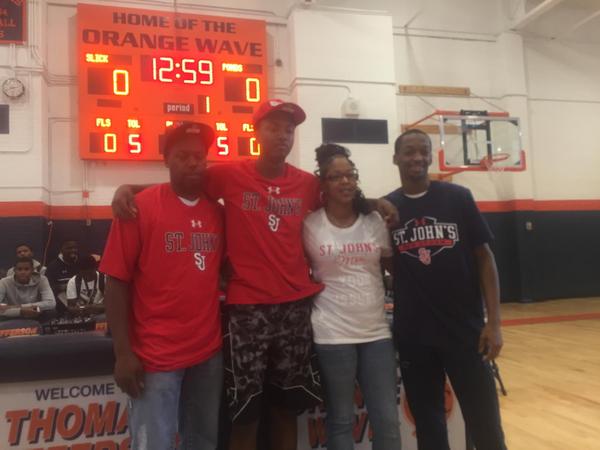 But Ponds wanted to stay home. He also said Mullin offered to let him wear his old number, No. 20, but that he might also wear No. 2. “It’s basically a dream come true,” Ponds said. “I always wanted to stay home and play in front of my family.” Ponds admitted he went “back and forth” between St. John’s and Providence with his family. “It was a big decision, we were going back and forth about that,” he said. “We came to the conclusion and picked St. John’s.” Shawn Ponds said “half of my family said leave, half of my family said stay. Ultimately, we’ve been here, so we might as well stay.” “Chris Mullin had a huge part,” he added. “He’s from here and he made it from here. And Shamorie would like to make it from here, too. “Being that Chris Mullin’s from New York, their style of play, they’re left-handed. It’s a new program so we’ll see how it’s going to go for them. But I think Shamorie wanted to be a part of something that’s going to build. St. John’s is going to build with Chris Mullin.” “It’s their first signature New York City recruit,” longtime New York recruiting expert Tom Konchalski said. “And St. John’s success and their tradition was built on getting the best New York City players to stay home. “Look at their Final Four team when they had Chris Mullin, Mark Jackson, Mike Moses, Ron Stewart, Bill Wennington, that team. And Walter Berry. So hopefully it’s going to return to that tradition of St. John’s being New York City’s team and getting the best players, and hopefully it’s going to snowball.” Ponds said he had already reached out to New York native Rawle Alkins, now at Word of God Academy in Raleigh, N.C. “I’m texting Rawle right now,” Ponds said.

Congratulations to my bro @ShamorieP on his commitment to St.Johns lil bro taking over the city this year ????????

Just jumped up and down as people looked at me weird at my hotel in Prague. Great day for St John’s & NYC #sjubb

While the Johnnies are looking overseas in addition to nationally, they must also build a wall around New York. //platform.twitter.com/widgets.js “They advertise themselves as New York City’s team,” Konchalski said. “They’ve gotta get the best players in New York City. Obviously the city doesn’t produce as many quality elite players as it used to, so they can’t only recruit within the five boroughs or the tri-state area, but ST. John’s has got to get the best players in New York if they’re going to return to even a semblance of their previous glory.” As for Ponds’ skill set, Konchalski said: “He’s the most improved player in New York City in the last 12 months. The game is so mental and right now he’s playing with total confidence. He can shoot 3’s, he’s gotta get stronger. He looks like the kind of player who can’t go to the basket but he can. “He has more shakes than Tom Carvel, more spin cycles than Maytag. He’s a 3-point shooter, too. Right now he’s playing with them offensive confidence. He has tremendous hands. I’ve never seen a player on any level better at guarding the in-bound passer and stealing the pass and scoring layups. He has the best hands since All-State.” Jefferson coach Lawrence “Bud” Pollard compared Ponds, nicknamed Slick, to two former NBA standouts. “My best analogy is he has a little bit of Kenny Anderson in him and a lot of Nick Van Exel in him because he’s active on defense, he’s crafty with the ball like Kenny, he shoots it like Nick,” he said. “He distributes like Kenny. He has a combination of those two guys. He’s a lefty. You might even throw a little bit of Brandon Jennings in there.”