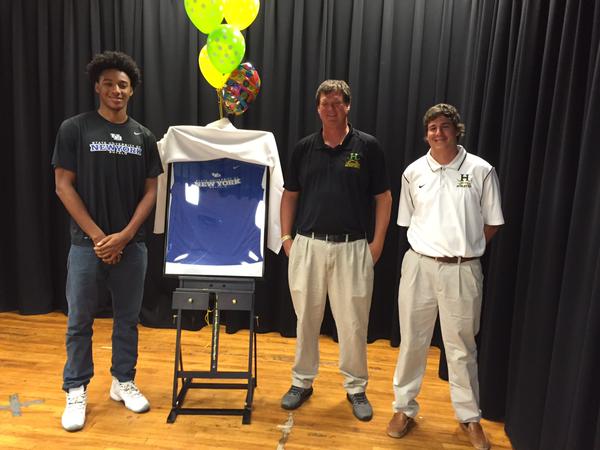 Buffalo and head coach Nate Oats landed a commitment on Monday from Quate McKinzie, a 6-foot-7, 205 power forward from Harrells Christian Academy (N.C.). McKinzie is rated the 40th power forward in the nation by ESPN and the No. 11 player in North Carolina. McKinzie also considered UNC-Wilmington  and Temple, but cancelled the Temple visit. Oats and assistant Donyell Marshall made McKinzie a priority in July and then brought him up for a visit last weekend. He is their first commit for 2016.

“He really likes Coach Marshall and Coach Oats,” McKinzie’s head coach Clayton Hall, told SNY.tv. “They also followed him everywhere this summer. He really enjoyed his visit and was impressed with the campus and the team. He and his mom were also very impressed with the academic side of the university.”

Hall says from the basketball side of things, McKinzie will be an important piece for Buffalo, and will be a difference maker.

“As far as skill set, he is an unbelievable athlete,” Hall said. “He plays way above the rim and is an incredible jumper. He will finish oops and missed shots that will make you scratch your head. He is a rim protector. He will block and alter at least 10 shots a game combined. He will stretch the defense and is quick off the bounce. He shoots it fairly well from deep, but it needs to improve along with his ball handling. I am happy and excited for Quate. Coach Oats got a great player and an even finer young man.”