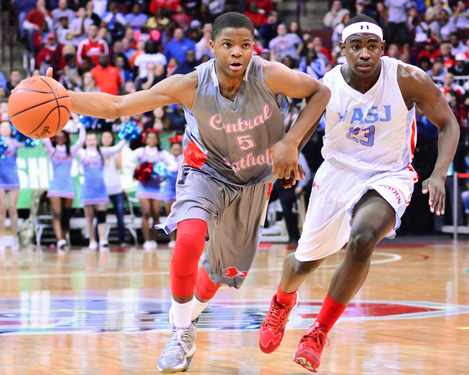 By JACK LeGWIN Four-star point guard Xavier Simpson has committed to Michigan. Ranked No. 69 in the class of 2016 by 247 Sports, Simpson had an original final four schools of Miami, Iowa State, Wisconsin and Illinois, but ended up choosing the Wolverines, as they made a push late.  One of the nation’s best floor generals, the 5-foot-11 point guard from Ohio is a player to watch this year. In much of the same mold as former Wolverine great Trey Burke, Simpson is a lock down defender who can lead a team extremely well. He is is the fourth commit for the Wolverines, joining fellow players from Ohio, Ibi Watson and Jon Teske, alongside Michigan native Austin Davis. Michigan was the favorite with 76 percent of the vote on the 247 Crystal Ball. Photo: 247 Sports Follow Jack on Twitter

On Eve of Leaving for Raleigh, Rawle Visits St. John's