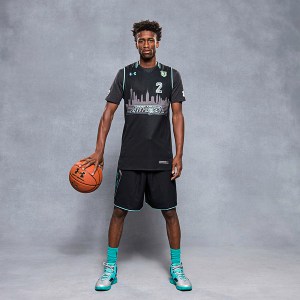 Kobi Simmons is headed to UNLV for his second official visit on Friday following a highly successful trip to Kentucky last weekend. “It went pretty good, he had a good time,” Demond Stephens, the player’s father, told SNY.tv by phone on Thursday. “Cal [Kentucky head coach John Calipari] let him know their plan and they want him, so he enjoyed it. “But he said he wanted to take these other visits.” The 6-foot-5 lead guard will now depart for UNLV Friday evening and then trips to Ohio State the following weekend. He is considering those three schools along with Georgia, and will make a decision sometime after the Ohio State visit the weekend of Sept. 12. “Yes, sir, after Ohio State we’ll probably take the week and do our homework and see how the landscape has shaken out by the end of September and then make a decision by the end of September,” Stephens said. Simmons averaged 17.8 points, 3.5 rebounds, 2.3 assists, and 1.1 steals in 19 games with the Atlanta Celtics on the adidas Gauntlet circuit. Calipari is pitching “positionless basketball” to recruits, and evidently indicated that to Simmons on his visit. “Like Cal says, if you get it, you push it,” his father said. “I you don’t get it, the next guard I’m sure will be able to push it so it’s all about being able to do more than one position, being able to do more than just be pigeonholed with the ball.” Kentucky is involved with several lead guards in the Class of 2016, including Simmons, Malik Monk and Dennis Smith Jr., as well as combo guards like Rawle Alkins. They have three lead guards on the roster this year in sophomore Tyler Ulis and freshmen Isaiah Briscoe and Jamal Murray. Both Briscoe and Murray are projected in the 2016 NBA Draft by DraftExpress.com, while Ulis ranks in their 2017 mock. “I didn’t ask [Calipari] that, but from what I’m hearing it’s pretty much locked that Tyler and Jamal got great situations, and Briscoe’s real close,” Stephens said. “I talk to a lot of people and the NBA loves Jamal and Tyler and they think Briscoe’s going to make it out of there, too. But I didn’t ask them [Kentucky].”