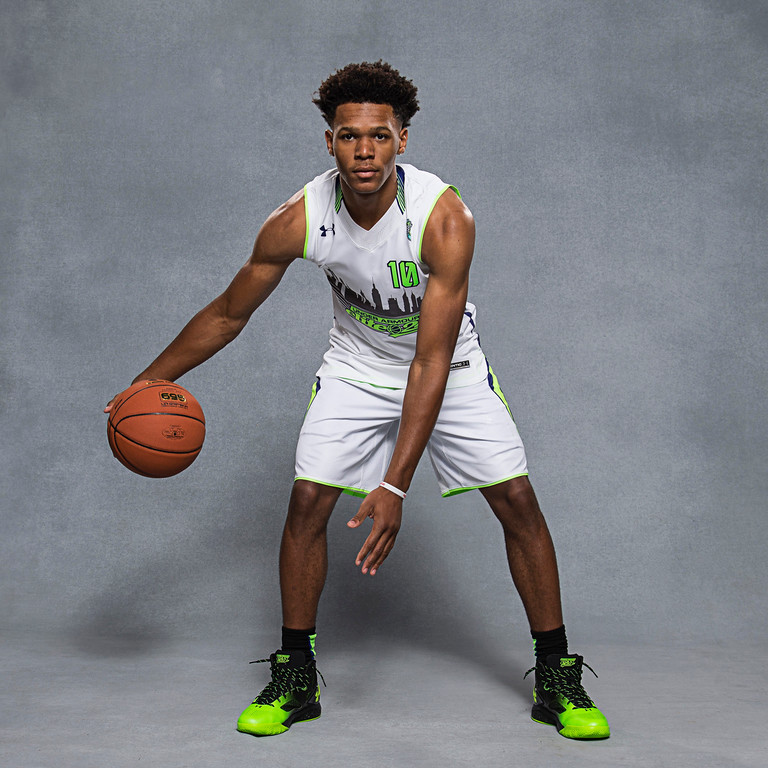 NEW YORK — Trevon Duval wowed media members and NBA scouts alike through two days worth of practices here at the Under Armour Elite 24 Game. The 6-foot-3 2017 floor general was the best guard among a talented group of guards — and it wasn’t really close. “Most definitely,” one NBA scout told SNY.tv. “Trevon’s control, speed bursts, athleticism and precocious understanding of when, where and how makes him one of the elite point guard prospects in high school. “He really knows how to break down a defense and make the right play, either for himself or a teammate. He works to get everyone involved.” Duval, by nature, is a quiet, soft-spoken young man who doesn’t like to blow his own horn, but he admitted he was having fun playing alongside studs like Josh Jackson, Thon Maker, DeAndre Ayton, Troy Brown and T.J. Leaf. “I’m having a lot of fun,” Duval said after practice Friday. “Playing with people like Josh and Thon and all these big-name players, athletic guys, it’s fun playing with these type of guys and I think I’m playing well with them because they kind of complement me and I complement them with trying to find them and make them look good, get their dunks and open shots and stuff like that.” Duval and the 6-7 Jackson, who has been compared to a young DeMar DeRozan, had a unique chemistry on the court. “I love playing with Josh,” Duval said. “I play against him all the time and I work out with him sometimes and now that I’m playing with him it’s pretty cool because he’s a dog. He doesn’t stop playing. He plays hard all the time and it’s always fun to play with somebody like that.” Like Rawle Alkins, another Elite 24 participant, Duval is dealing both with deciding where to play high school ball this upcoming season and is also being recruited by a bevy of big time colleges. The Delaware native spent last season at St. Benedict’s Prep in Newark, but it remains unclear if he will return there this season. Asked if he would be back there, he said, “I don’t know.” Asked when he will know where he’s going, he said, “I should’ve known by now. I should know real soon.” Trevor Duval, Trevon’s father, is still weighing the options and said they’re considering Findlay Prep, Montverde Academy and Brewster Academy, among others. “Right now we’re just seeking options because his stock has risen a lot so there are a lot of options now,” Trevor told SNY.tv. “We’re looking to see what the best situation is because we feel as a family these two years are very critical as a person for his development as a basketball player. “St. Benedict’s is a good school. There’s other good schools so we just don’t want to put all the eggs in one basket.” Trevor would like to see his son develop his basketball game before he goes to college. “He has to work on his jump shot, he has to work on speeding the game up a little bit, he has to work on some more decision-making, so we’re just seeing who can help him mature as a player,” he said. On the college front, Duval holds offers from Arizona, Indiana, Kansas, Louisville, UNLV, N.C. State, St. John’s, Maryland, Cal, Syracuse, Rutgers and Seton Hall, among others. Pretty much everyone but Duke and Kentucky — and they have been calling. “Kentucky’s called me, talked to me and my dad a couple times,” Duval said. “It was Kentucky calling you, it was kind of crazy with all the pros they sent to the NBA and the name of Kentucky. It was kind of cool that they contacted me.” Asked if he would like to visit, he said, “I would love to see their campus, see how it is out there.” Duke is also constantly in touch. “Coach [Jon] Scheyer texts me all the time,” Duval said. “I talk to him about high school or just my daily stuff. He tries to stay in contact as much as possible.” Asked if they will offer, he said. “Do I think they will offer me? Yeah.” Duval also recently visited UCLA after adidas Nations in Long Beach, CAlif. “UCLA was nice,” he said. “I wasn’t really out there for that long but they showed me their gym, their facilities, a little bit of their campus. It was real nice being in California and getting to see that type of school.” And Duval may take an upcoming unofficial visit to St. John’s to visit new coach Chris Mullin, his father said. “St. John’s is in the area, but right now we gotta get this high school thing going,” Trevor Duval said. Villanova and Syracuse have also long been linked to Duval, who must first make his high school decision before he can focus on college.   Photo: Kelly Kline / Under Armour