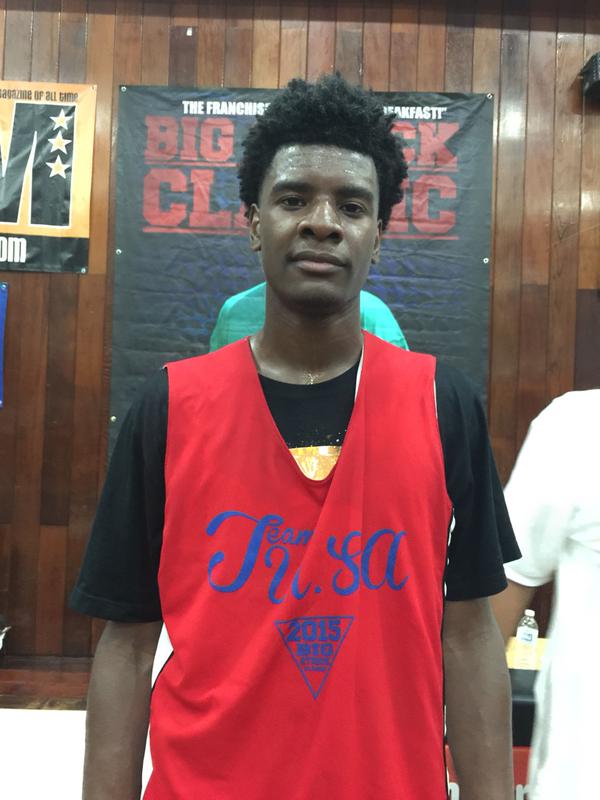 NEW YORK — Josh Jackson has enjoyed quite a few weeks for himself at the tail end of this summer. The 6-foot-7 wing out of Prolific Prep (CA) recently went for a Big Strick Classic-record 50 points to go with 16 rebounds, 5 assists and 2 steals in the Big Strick Classic here in New York. He was installed as the projected No. 4 pick in the 2017 NBA Draft by DraftExpress.com. And he impressed a slew of media and NBA scouts alike during the first two days of practice here at the Under Armour Elite 24, with the game set for Saturday night on ESPNU. “Josh Jackson has at the potential to be a DeMar DeRozan-type scorer if he can improve the range on his jump shoot and strength,” one NBA scout in attendance told SNY.tv. Said Jackson: “I feel like I’ve been playing pretty good, I could’ve played better but it doesn’t mean anything until [Saturday] night, so hopefully we can pick it up then.” It’s no wonder that a slew of big time schools would love to add the shooting guard for the 2016-17 season. Jackson visited Maryland earlier this week — a visit first reported by SNY.tv — and said he loved it. “It’s a beautiful place, I love the gym,” he said Friday after practice. “The gym is one of the best gyms I’ve seen in high school basketball so I really enjoyed my visit to Maryland. I fell in love with the gym. I really wanted to meet a lot of the players but sadly most of them weren’t there, some were at home.” Coach Mark Turgeon understandably appreciates Jackson’s game. “He would just let me play my game,” Jackson said. “He knows I play really hard, I’m diving on the ball for loose balls and things like that. He says I’m the kind of guy that he wants on his team.” Asked if he could envision himself there, he said, “Yes, I could definitely envision myself there.” Jackson said he would also like to take visits to Arizona, Kansas and Michigan State. His mother, Apples Jones, lives in Michigan. “I don’t have anything planned yet, but I’m definitely going to start getting more serious about it,” he said. “Setting up visits and things like that.” Arizona: “I love Arizona as well,” he said. “Coach [Sean] Miller, he and I have a lot of experience with one another, playing U19 basketball. We spent a whole month together. I think he’s a great guy, he’s a great coach. And on my visit down to Arizona, I just loved the campus, the atmosphere, the fans are nice. Everybody treats you nice.” Kansas: “I’m going to take an official visit to Kansas, I’m just not sure when yet.” Michigan State: “The thing I like about Michigan State is Coach [Tom] Izzo, he’s a great guy. I grew up watching them all the time and I really feel like their style of play fits into my personality. They’re very tough team and even when Coach Izzo doesn’t have the best talent, he’s still able to win a lot of games. I’ve never seen Michigan State be out-toughed as at team.” He also mentioned Villanova, UNLV and UCLA among schools he’s considering. As for a timeframe on his decision, Jackson is in no hurry. “It’s more than likely going to be a late decision,” he said. “But who knows? I feel like whenever I know exactly where I want to go, I’ll be ready to commit.” Follow Adam Zagoria on Twitter And like ZAGS on Facebook