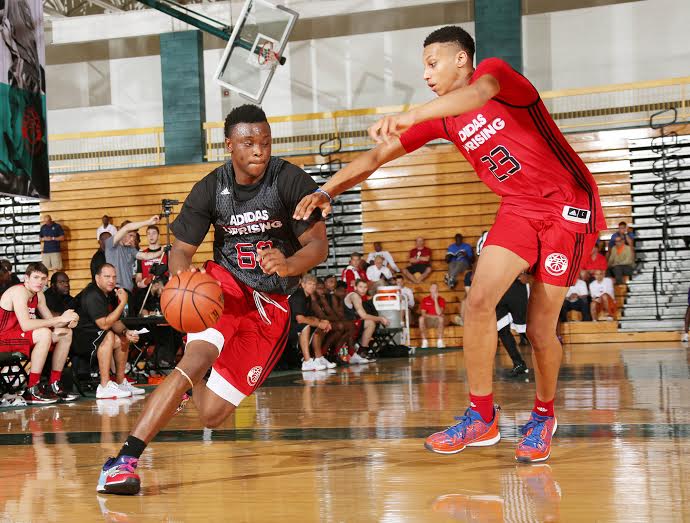 By JOSH NEWMAN NEW YORK – Mustapha Heron has a top five, but the 6-foot-5 wing out of Sacred Heart (CT) High School admits that his list of St. John’s, Auburn, Mississippi State, Marquette and Alabama could still change. Heron’s father, Bryan, was quoted in the Republican-American newspaper earlier this week as saying that Kentucky, Duke and North Carolina are also recruiting his son. “My options are staying open, but those are the five I’m most comfortable with and the places I feel like I can go and have a huge impact right away,” Heron told SNY.tv Friday afternoon at practice for Saturday night’s Big Strick Classic at Gauchos Gym in the Bronx. “The list could change depending on a lot of things. Coaches coming in, coaches leaving, players leaving, coming in. It all depends on what’s going on at each specific school.” Of course, all St. John’s fans are hoping that not only Heron opts to play for the Red Storm, but that he brings his New York Rens AAU teammate, Rawle Alkins, along with him. A package deal involving Heron and Alkins has been bandied about, but the only school they have in common right now is St. John’s. New St. John’s head coach Chris Mullin has made major headway with Alkins, Meanwhile, Bryan Heron played pro ball overseas with Red Storm assistant Barry Rohrssen, which keeps them strongly in the mix. Heron’s only official visit set right now is Mississippi State on Sept. 27. “It would be nice,” Heron said when asked what a Kentucky offer would mean to him. “It’s a great program, Coach Cal is a great coach and he’s great at developing guards. It’s just a great program. “It’s appealing know that he puts you on that stage and if you perform, then you’ll go to the league.” Photo: adidas Follow Josh Newman on Twitter

Mustapha Heron Has a Top Five