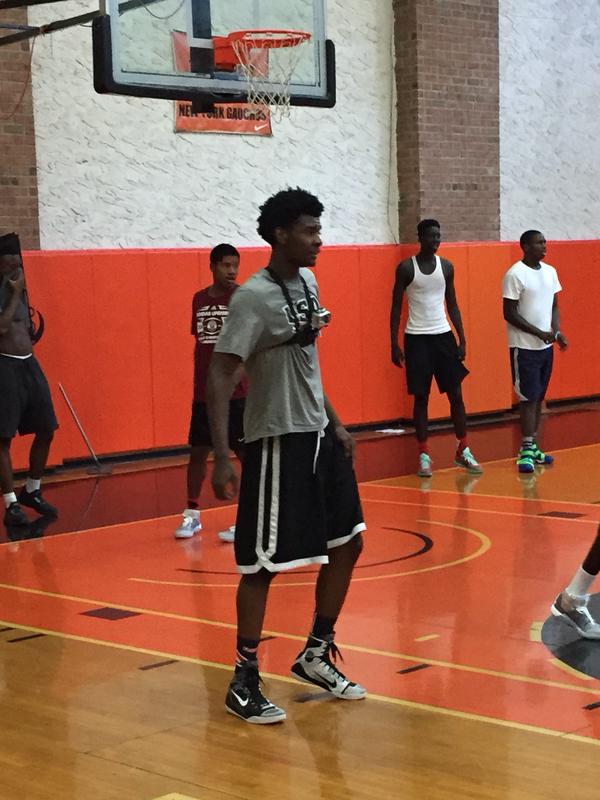 NEW YORK — Josh Jackson will take an unofficial visit to Maryland in the next two weeks and will likely take officials to Arizona and Kansas during the school year, his mother told SNY.tv. The 6-foot-7 Jackson attends Napa (CA) Justin-Siena and is the No. 1 shooting guard in the Class of 2016 according to 247Sports.com. He figures to be a projected lottery pick in the 2017 NBA Draft by DraftExpress.com. “We’ll take [an unofficial] to Maryland, we’re going to try to go in between here and Elite 24 [on Aug. 22],” Apples Jones, Jackson’s mother and a Michigan native, told SNY.tv at the Big Strick Classic practice Friday afternoon at the Gauchos Gym. “We’re going to try to squeeze it in. “Maryland has come a long way, they’re getting in the game.” Jones listed Arizona, Kansas, Michigan State and UCLA as the other schools working hardest for her son, who wore a GoPro camera during practice Friday. “Right now as far as I can see and who I talk to, Arizona, Kansas, Michigan State, UCLA,” she said. “I spend a lot of time talking to those guys.” Once Jackson finishes his standardized tests, he’ll plan some official visits. “At this moment Josh just passed the SAT and he’s working on the ACT,” she said. “Once he finishes those tests he’ll be more focused on where he’s going to go for his college. We already took an unofficial to Arizona. We’ve been to Michigan State.” Michigan State is the home-state school for Jones and her son. “Michigan State was good,” she said. “Coach [Tom] Izzo, I think he’s a good coach. He cares about the kids and playing in his system. Those kids seem to develop.” Official visits will come during the school year. “When school starts we’ll start to take some of the official visits during his senior year,” Jones said. “I know Arizona [will likely get a visit]. I haven’t really talked to Josh about it because I don’t really want him focusing on it. I’m sure Kansas, we’ll take that visit.” Asked if Kentucky was involved, Jones said, “No, not at all.” Jackson could decide in the fall or the spring. “He’s definitely going to take those five [official] visits and shortly after that I think Josh will be committing,” she said. “If not November, April. I know he takes that ACT test in November.” Asked about rumors that her son might play overseas instead of going to college, Jones flatly dismissed those. “I don’t know [where they came from], “I can’t control it,” she said. “I’m as shocked as other people who read it. Everything will take care of itself.”