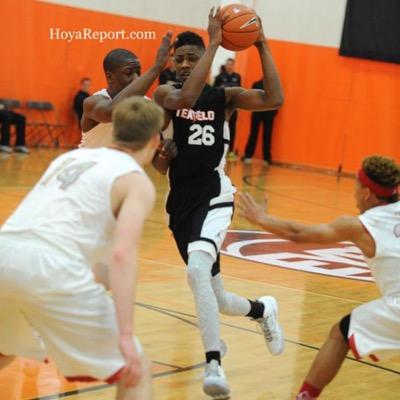 Andre Rafus is coming to New Jersey this year, but will attend Roselle (N.J.) Catholic instead of St. Benedict’s Prep. “Just thought it was the best fit,” the 6-foot-9, 190-pound Class of 2017 forward  from Baltimore St. Frances told SNY.tv. Rafus consulted with Kentucky freshman guard Isaiah Briscoe, who finished up at Roselle, winning the New Jersey Tournament of Champions title in March, after starting his career at St. Benedict’s in Newark. “After speaking with Andre Rafus’ dad, and looking at what both schools offered on and off the court, his family felt more comfortable with Roselle being he will be moving to the Jersey area,” Dwayne Wise, recruiting director for Team Melo, told SNY.tv. “Also the teammates he will be playing with and his relationship with former talents like Isaiah Briscoe factored in. He thinks they have a chance to win a high school championship and develop all around with the Roselle staff.” The No. 22 small forward in the Class of 2017 according to 247Sports.com, Rafus is the second high-profile transfer to Roselle Catholic this offseason, following former Teaneck point guard Leondre Washington. The school also remains in the mix for 2016 Syracuse commit Tyus Battle, who is thought to be considering Roselle and St. Joe’s-Metuchen after parting ways with Gill St. Bernard. Roselle also returns several key players, including guard Matt Bullock, wing Louis King and big man Naz Reid. Rafus recently told SNY.tv he wanted to get out of Baltimore and into a safer environment. “My main goal is getting my family out of Baltimore,” he said. “It’s crazy, there’s a whole lot of shootings down here.” Rafus already boasts scholarship offers from UNLV, USC, UCLA, California, UConn, Kansas State, Dayton, UMass, Missouri, Tennessee, Georgetown, West Virginia, St. John’s, VCU, Memphis, Arizona State and Delaware. His most recent offers came from Cal, St. John’s and VCU. “Really all the schools that have offered me are recruiting me,” he said. “All the schools that offered me a scholarship have been calling me on a daily basis.”