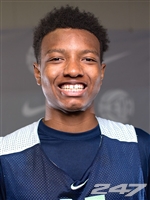 By RYAN FISH CHICAGO – Wendell Carter Jr. may not be playing during his stay at the Nike Global Challenge, but that doesn’t mean the buzz surrounding his recruitment is slowing down. The talented 2017 prospect from Atlanta continues to be linked to big-time programs like Duke and Kentucky as other schools look to jump in on his recruitment. Entering his junior year, the past few months have been a whirlwind for Carter, especially after he won the Peach Jam with the Georgia Stars and was named First-Team All-Peach Jam. “I just try to weather the storm,” Carter said about coaches constantly reaching out to him. “I try not to answer every call, but if I got time I’ll answer.” The 6-foot-8 Carter isn’t playing in the tournament due to a groin injury, which he didn’t seem to think was serious. “Of course I could have played through it, but I think I just need a break from basketball,” Carter said after his USA South team beat China, 96-79, on Friday morning. “For just one week, anyway. I’ve been out there all year.” Carter seemed happy to be in Chicago nonetheless, saying he was impressed most by the event’s hospitality. He’s also been impressed with the reigning national champions, as Duke continues to recruit him and other top prospects aggressively. Representatives from the school came to watch the tournament, including an appearance by head coach Mike Krzyzewski on Thursday. “They’re a pretty good program,” Carter said. “I hear from them every day, knowing that they really want me. Some schools I don’t hear from often. I only hear from them when I do outstanding things. But with Duke, it’s like every day they could call me.” Carter also weighed in on elite 2016 prospect Jayson Tatum’s recent commitment to Duke. “It’s big,” he said. “But I mean, most people think he’s going to be a ‘one-and-done,’ so if I do end up going [to Duke] he probably won’t even be there.” Another program that Carter has been linked to is Kentucky, with assistant coaches attending the Challenge Thursday and head coach John Calipari making an appearance on Friday. “I like their school a lot,” Carter said. “They called my parents not too long ago, talking about how bad they want me, stuff like that. So they’re in the run of things.” Carter mentioned he wanted to visit those two campuses soon, along with Harvard and North Carolina, hoping to learn more and ultimately find a school that will allow him to improve as a player. And yet, Carter said his decision wouldn’t be based on basketball alone. “Of course, academics,” Carter said. “That’s the priority, number one.” Follow Ryan on Twitter