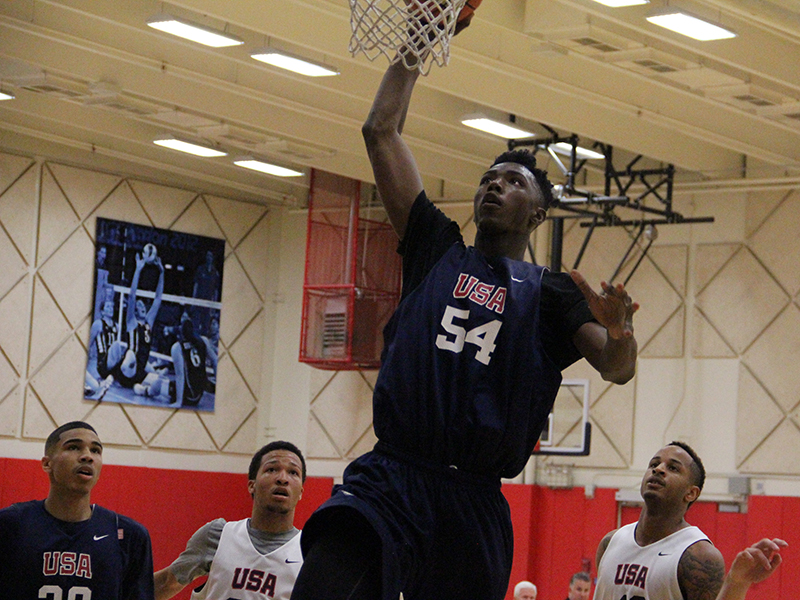 NORTH AUGUSTA, S.C. — Harry Giles is planning to cut his college list later this summer and then arrive at a decision sometime this fall. The 6-foot-10 Giles out of Winston-Salem (N.C.) Wesleyan is considering eight schools — Duke, Kentucky, North Carolina, Wake Forest, Kansas, Syracuse, Ohio State and UNLV. “He’s still got all eight schools,” Harry Giles Sr. told SNY.tv after CP3, with Chris Paul on the bench, destroyed Team Penny, led by Penny Hardaway, 83-59, at the Peach Jam. “Hopefully in the next couple of months we’ll narrow it down and hopefully by November we’ll make a decision where we want to go. Before the start of the college season or right in the beginning of it.” Duke coach Mike Krzyzewski and assistant Jeff Capel sat courtside for Giles’ game Thursday night, as was Kentucky assistant Kenny Payne and Kansas assistant Kurtis Townsend, among others. “It makes a statement that all the coaches that are recruiting him will give him an opportunity to play,” Giles Sr. said. “We are very appreciative.” Giles told reporters, according to Ben Roberts: “I’m open to everything.” Last month, Giles told SNY.tv that four schools are are “probably” recruiting him the hardest.” “Probably Duke, Kentucky, Carolina, Wake Forest, probably those four,” he said. At that point, he said he planned to cut his list once more. “I’ll probably cut it again after I take a couple visits to schools, so probably end of the summer,” he said. “I’m trying to plan some visits though.” Giles also broke down all eight schools on his list: Duke: “Coach K is a legendary coach, great guy. I have a great relationship with the coaching staff. It’s at home as well so you can never go wrong staying at home. And they’re just legendary, they produce a lot of pros. The players got a relationship with the coach after they leave Duke.” On whether he talks with Jason Tatum and Dennis Smith about a package deal: “We talk about it here and there. We just talk as boys…We kind of throw it in there from time to time but we gotta make the right decision for us.” Kentucky: “Coach Cal [John Calipari], great dude, man. I have a great relationship with him. I’ve known him since my freshman year. He developed a lot of players at Memphis and Kentucky, so I can relate to that. Kentucky’s a great place, a great program, so you can never go wrong going there.” North Carolina: “Not really [concerned about the academic scandal]. You never really know the truth, so it don’t bother me. You just gotta trust the coaching staff that’s recruiting you to tell the honest truth.” Wake Forest: “Coach [Danny] Manning is a great dude. He’s from North Carolina as well. We’re kind of similar…Wake Forest is in my hometown where I live so Wake Forest wouldn’t be a bad deal, either.” Kansas: “Great program, they’re known for developing bigs. Coach [Bill] Self is cool, the coaching staff is really cool, so you can never go wrong with them.” Syracuse: “[Jim] Boeheim’s my man, great dude. Also they produce a lot of bigs.” Ohio State: “They’ve had some good bigs in the past. Coach [Thad] Matta’s a good dude, I like coaching staff, got a great relationship with them and I just like the way they play.” UNLV: “They like to run, I like that, too.”   Giles is fresh off winning a gold medal with the USA U19 team last Sunday in Greece, where they beat Croatia, 79-71, in OT. “Anytime you can win a gold medal for your country, it’s exciting,” Giles Sr. said. Photo: USA Basketball