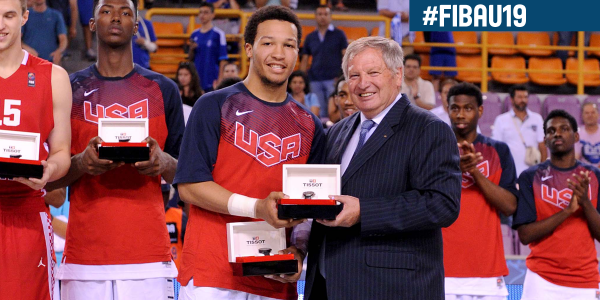 Facing its toughest game of the tournament, the United States defended its U19 world title with a 79-71 overtime victory over Croatia in the gold-medal game of the FIBA Under-19 World Championship in Greece. One day after dropping 30 points on the Greeks in the  semifinals, Villanova freshman Jalen Brunson went for 14 points, 7 assists, 5 rebounds and no turnovers to earn tournament MVP honors. “I’m speechless,” Brunson said. “I’ve got to give credit to my teammates. They found me the right positions to just make plays. I just can’t thank everybody enough. We worked so hard for this.” Brunson averaged 14.0 points, 3.3 rebounds and team-highs of 5.6 assists and 2.1 steals a game during the tournament. Brunson shot 5-for-15 from the field, but put the Americans ahead for good with the first basket of overtime. “[Brunson] had a great tournament,” said USA head coach Sean Miller about Brunson. “He emerged as our leader as well, and when you have a leader at that position it helps things. I thought his performance against Greece with 30 points was an incredible performance. Down the home stretch of today’s game he stepped up big.” Joining Brunson on the five-member All-Tournament Team was the USA’s Harry Giles (Wesleyan Christian Academy/Winston-Salem, N.C.), who averaged a double-double of 14.0 points and 10.6 rebounds during the tournament and went for 13 points and 16 rebounds in the final. St. Louis (MO) Chaminado 2016 guard Jayson Tatum added 13 points. The all-tournament team featured American Tyler Dorsey as well as Croatian star Marko Arapovic, who fouled out early in the fourth quarter but finished with 16 points and 12 rebounds,  and Turkey’s Furkan Korkmaz. Josh Jackson added 10 points for the Americans before fouling out. Nik Slavica led Croatia with 23 points, and flashed an amazing dunk of an attempted Tatum dunk at the rim. Luka Bozic and Ivica Zubac added 12 points apiece. The game was a rematch of one played Sunday in which the Americans registered a 103-81 in group play. Croatia continues to play without projected top-5 2016 draft pick Dragan Bender. The 7-foot-1, 17-year-old professional is sitting out due to a sneaker dispute.  In regulation, Bozic made 1-of-2 free throws to tie the game at 57-all with 4.3 seconds left. Had he made the second, Croatia would’ve led 58-57 and forced the Americans to win it in the final seconds. Brunson missed a 27-foot desperation shot at the buzzer and the game went to overtime. In the extra period, Brunson quickly put the USA up with a driving basket and Tatum added a dunk to make it 71-67. Chinanu Onuaku put the USA up 73-67 with another layup. Playing with only a five-man rotation down the stretch, Croatia appeared mentally and physically spent. The Americans led by 10 in the third period and by only 50-47 entering the fourth period, but couldn’t hold the lead.   **RECRUITING NOTES **Giles is down to eight schools, but recently told me four are working hardest. **Tatum says he’s still considering four schools: Kentucky, Duke, North Carolina and hometown St. Louis. Photo: USA Basketball

Jayson Tatum Annihilates Greek Defender With Poster Dunk, Then Gets Blocked at the Rim by Croatia in Gold-Medal Game