Jamal Murray to Kentucky, Plans to be One-and-Done

The Jamal Murray Sweepstakes are over and Kentucky is the big winner. The 6-foot-5 Murray out of Orangeville Prep (Ontario) was down to two schools — Oregon and Kentucky — and made his announcement Wednesday night on Canada’s TSN. Murray has officially reclassified to 2015 and will be a Wildcat next season, joining a loaded backcourt that will include fellow point guards Tyler Ulis and Isaiah Briscoe. “I will be attending University of Kentucky,” Murray said as he unveiled a blue UK shirt and a white Kentucky baseball cap. “At first it was just distance. I’ll be able to stay a little bit closer to my parents. After I looked at the history of Kentucky and how many players they got to the next level, it just made me want to go there even more and set my mind to one year of just hard work and dedication to the game.” Murray is now ranked as the No. 10 recruit in the class of 2015 by 247Sports and is Scout’s No. 12 overall recruit in 2015. “Jamal can score the ball from all levels,” CIA Bounce coach Tony McIntyre told SNY.tv. “He sees the floor extremely well. He is a 6-5 point guard and can lead a team. Whatever school he ends up at is getting a high-powered scoring point guard that is an absolute winner.” 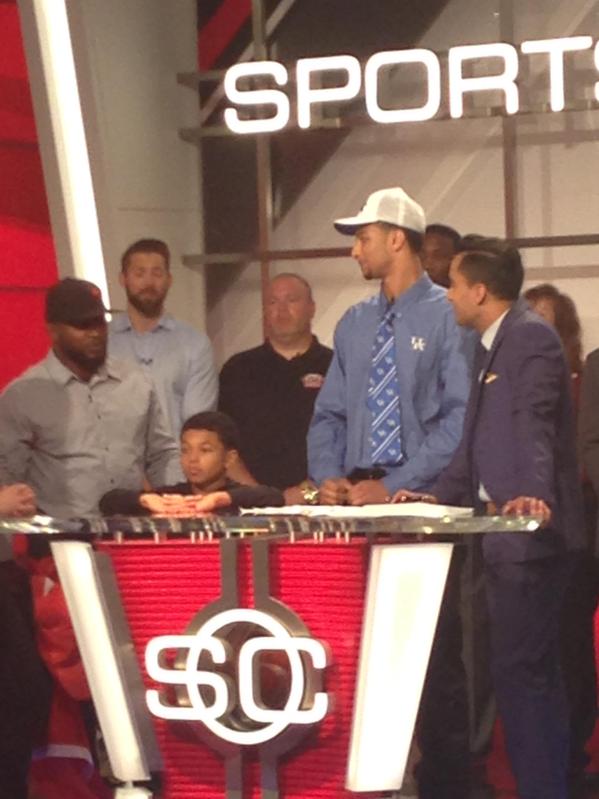 “Jamal’s best attribute is his competitive will to win, and his ability to do multiple things to help his team win,” Orangeville Prep coach Larry Blunt told SNY.tv. “Jamal has big upside. His maturity is well beyond his years, and he has the ability to adapt to the needs of a team because he the ability to do multiple things on the court. His work ethic sets him apart.” Oregon forward Elgin Cook Tweeted earlier this week that Murray was Oregon’s “newest commit,” although it is unclear what Cook based that Tweet on. Oregon assistant Mike Mennenga had been successful in recruiting other Canadians to Oregon, including Murray’s former CIA Bounce teammate Dillon Brooks and Villanova transfer Dylan Ennis, brother of Milwaukee Bucks point guard Tyler Ennis and McIntyre’s son. Dylan will be immediately eligible at Oregon for the 2015-16 season. Instead, Kentucky head coach John Calipari will now have multiple interchangeable guards at his disposal, since Murray, Ulis and Briscoe can also play off the ball. As much as he is opposed to the platoon system, Calipari must find a way to appease all three guards now. “I trust (Cal) with how he’s going to play us, and we’re going to have a lot of fun with this,” Murray told Ben Roberts of NextCats.com. “I’m just looking forward to getting the job done and win a championship. That’s what I’m there for.” Murray joins Briscoe, shooting guard Charles Matthews, center Skal Labissiere and JUCO guard Mychal Mulder in Kentucky’s 2015 haul. The 7-foot Labissiere is projected as the No. 1 pick in 2016 by DraftExpress.com. Murray is currently listed as the No. 21 pick in the 2016, but that’s not good enough for the ultra-competitive point guard. “I have some work to do, I think I can do a lot better than that,” Murray told SNY.tv recently. “I see no reason why I shouldn’t be there [No. 1] in 2016.” Photo: Canada Basketball