Jamal Murray Reclassifying to 2015, Will Announce This Week

Canadian point guard Jamal Murray is reclassifying to 2015 and will announce his college choice this week, a source close to the situation confirmed to SNY.tv. The source said the 6-foot-5 Murray out of Orangeville Prep (Ontario) is “definitely” down to two schools — Oregon and Kentucky. Oregon forward Elgin Cook Tweeted that Murray was Oregon’s “newest commit,” although it is unclear what Cook based that Tweet on. Oregon assistant Mike Mennenga has been successful in recruiting other Canadians to Oregon, including Murray’s former CIA Bounce teammate Dillon Brooks and Villanova transfer Dylan Ennis, brother of Milwaukee Bucks point guard Tyler Ennis. Dylan will be immediately eligible at Oregon for the 2015-16 season. Should Murray join him, head coach Dana Altman would have two talented floor generals entering the program. Dylan Ennis will only be there for one year and Murray, who scored 30 points in leading the World Team over Team USA in the Nike Hoop Summit in Portland in April, may also stay that long. Murray is currently listed as the No. 21 pick in the 2016 NBA Draft by DraftExpress.com, but that’s not good enough for the ultra-competitive point guard. “I have some work to do, I think I can do a lot better than that,” Murray told SNY.tv recently. “I see no reason why I shouldn’t be there [No. 1] in 2016.”

Murray recently told SNY.tv that the advantage of reclassing to 2015 would be, “Going to a good university, getting my education and looking forward to the next step.” 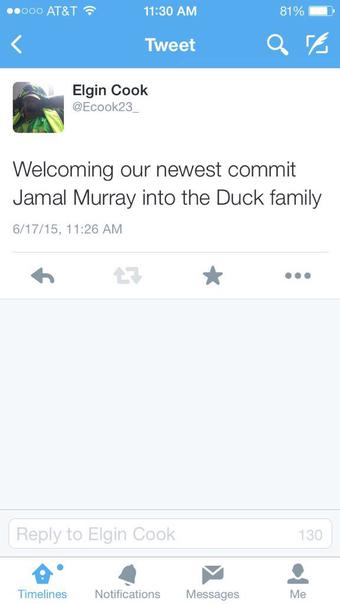 Roger Murray, the player’s father, was not immediately available for comment, but a report out of Canada indicated Murray would announce his college choice on Tuesday. Murray has recently taken official visits to both Oregon and Kentucky. Kentucky already has rising sophomore point guard Tyler Ulis and incoming point guard Isaiah Briscoe, who recently was replaced on the USA U19 roster. Canada has produced back-to-back No. 1 NBA Draft picks in Anthony Bennett (Findlay Prep/UNLV) and Andrew Wiggins (Huntington Prep/Kansas), as well as numerous other players, including Tristan Thompson, Cory Joseph, Kelly Olynyk and Tyler Ennis. Murray appears to be the next in line of strong Canuck ballers en route to the NBA. “I think so, I think so,” Canadian Nike rep Mark Baynes said, “as long as he stays on the path and puts in the work.”