Emmanuel Mudiay Works Out for Sixers, D’Angelo Russell Up Wednesday 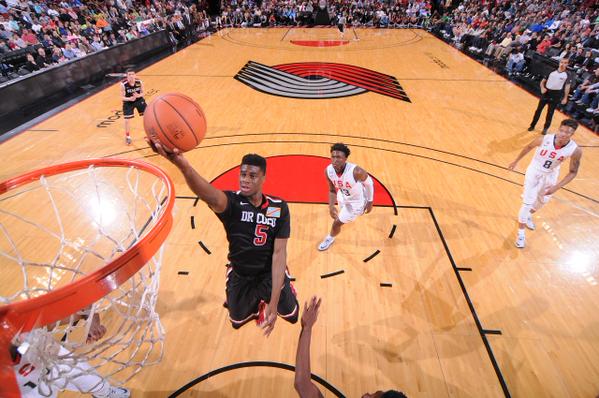 As the Philadelphia 76ers weigh what to do with the No. 3 pick in the NBA Draft, they continue to work out elite prospects. Emmanuel Mudiay worked out for the Sixers on Tuesday after meeting on Monday with team officials. The team will also work out Ohio State guard D’Angelo Russell on Wednesday, sources confirmed to SNY.tv after it was first reported by Mike Scotto of SheridanHoops.com. Russell cancelled a workout with the Sixers last Friday. “[Mudiay] looked good,” one source said. “Very, very athletic and strong. Good finisher with either hand.” The 6-foot-5 Mudiay has already worked out for the Lakers and Knicks, who pick at No. 2 and 4, respectively. “Emmanuel Mudiay is going to make everyone on his team better,” Larry Brown, the former Knicks and Sixers and current SMU coach, told The 4 Quarters Podcast. DraftExpress.com currently has the Sixers selecting Latvian 7-footer Kristaps Porzingis, whose stock continues to rise as he impresses decision-makers.

As for the 6-5 Russell, DraftExpress.com has him going No. 4 to the Knicks, but many observers believe he could be gone by the time they pick. Russell has already impressed former UCLA star Don MacLean, who is training Russell, Karl-Anthony Towns, Willie Cauley-Stein and others in L.A. “He’s very smart,” MacLean told SNY.tv. “He asks me questions that no guys have ever asked me when we’re taking about why we’re doing something. Guys just normally go through the workout but he wants to know why. “Based on his size and his length and his understanding of the game, he’s going to be really, really good. People knock him defensively but he’s better than most people think. We’ve already done a lot of live stuff with him and Devin [Booker] and he guards better than people think.” Still, MacLean thinks the two big guys — Towns and Jahlil Okafor — are more likely to go 1-2 with Russell slotting in somewhere after that. “If the question is, is D’Angelo talented enough to go ahead of one of those guys, I think he’s talented enough but you just don’t see guys as good as Towns and Okafor every year,” MacLean said. “So as good as D’Angelo Russell is, I don’t think it supersedes good bigs.”