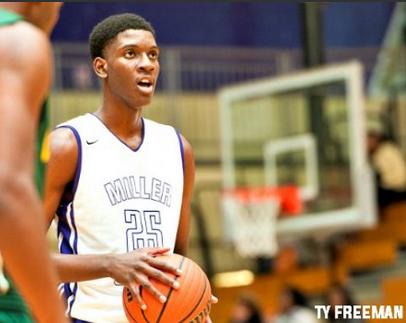 By JACK LeGWIN Lamont West has committed to West Virginia. The 6-foot-7 senior from Miller Grove (Ga.) said that a big part in his commitment was his relationship with coaching staff. “I really liked the staff,” West told SNY.tv. “My mom liked it, I figured it would be a good fit.” West said that his relationship with head coach Bob Huggins is strong, and that played a role in his decision. “I just felt like it was where I should be,” West said. “He said if I came to West Virginia I’d have to work hard. He said that I’d be good with the 4 out 1 in, and he showed me film about what they run.” West said that other schools tried to make a run late, but it was too little to late for them. “Some other schools came in later like Louisville and St. John’s,” West said. “But it was a little bit too late for those schools.” West averaged 15.8 points and 7.7 rebounds for a Miller Grove squad this past year, that went 27-4. West is the fourth commit for the Mountaineers in the class of 2015, joining Teyvon Myers, Esa Ahmad and James Bolden.   GREG KING TO EASTERN KENTUCKY

Greg King, a 6-8 power forward from Chipola (FL) College, committed to Eastern Kentucky and head coach Dan McHale, a source told SNY.tv. King, who also considered Charlotte, has three years remaining. “I chose Eastern Kentucky because it felt like the best fit,” he told SNY.tv. “I liked the coaching staff.” He averaged 6.4 points and 5.9 rebounds last season. “I will bring athletic ability and toughness,” he said.   Photo: Chipola College Follow Jack on Twitter