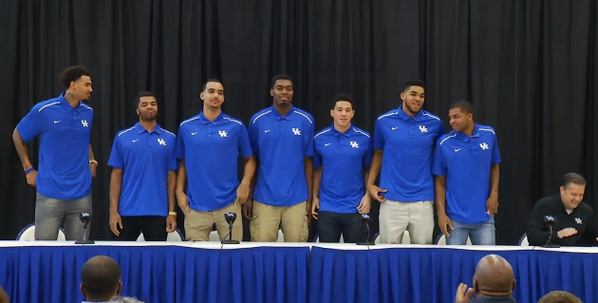 By JOSH NEWMAN & ADAM ZAGORIA To the surprise of no one, there will be a mass exodus at the University of Kentucky. Freshmen Devin Booker, Trey Lyles and Karl-Anthony Towns, sophomores Aaron Harrison, Andrew Harrison and Dakari Johnson, and junior center 7-footer Willie Cauley-Stein all declared their intentions to enter the 2015 NBA Draft on Thursday afternoon in a press conference held at the Joe Craft Center on the Lexington, Ky. campus. We reported a week ago that seven Kentucky players “are gone” to the NBA. “It’s about each individual up here making a decision – not based on what’s right for this university, not based on what’s right for me and our staff – but what’s right for them and their families,” UK head coach John Calipari said at Thursday’s press conference. “The way this works, I meet with each player after the last game, and truly it’s the morning after the last game. I ask, ‘Do you want me to explore your options?’ They all said yes. A few said no. We gather the information. We talk to about 20 NBA teams, maybe more. We let the parents talk directly to the NBA so there’s no confusion. We have about a five-minute meeting – maybe. I’m not convincing them to stay and I’m not pushing anybody out the door. This is their choice.” The whopping seven Wildcats leaving outdoes the six who left in 2012 in the wake of the program’s most-recent national championship. That year, all six were drafted, including four in the first round. Freshman sensation Anthony Davis was the No. 1 overall pick, while classmate Michael Kidd-Gilchrist went No. 2. “It’s the start of something big for all of us,” Cauley-Stein said. “We think it’s the time to go.” Still, several NBA personnel said they wouldn’t be surpised if at least a couple of these guys spent time in the NBA D-League next season. “Not surprising,” an NBA scout told SNY.tv of the seven players leaving. “I think Dakari and the Harrisons, for sure, will spend time in the D-League. Lyles and Booker may go there for a brief stint depending on where they get drafted in the first round and by whom.” One NBA executive agreed with that analysis. Each players draft prospects vary. The 7-foot Towns out of Piscataway, N.J., is the projected No. 1 pick by DraftExpress.com, and Charles Barkley and Reggie Miller both told SNY.tv they would take him first, especially if they were the Knicks. Both Towns’ high school coach and his AAU coach told SNY.tv that Towns would thrive if picked by the Knicks. “We just wanted to chase our dreams and we felt like this was the right time for us to take that next step in our careers and just pursue our dreams and aspirations,” Towns said. Cauley-Stein (No. 6), Booker (No. 17) and Lyles (No. 19) are all projected to go in the first round by DraftExpress, but Johnson (No. 38) and Andrew Harrison (No. 53) are slotted in the second round, where contracts are not fully-guaranteed. “Me and my family sat down with Coach Cal yesterday and we just had a meeting,” Johnson said. “Last night, I just prayed on it and just really thought about it hard.” Aaron Harrison is the only one of the seven projected to go undrafted at the moment.

The defections leave freshman point guard Tyler Ulis , 6-9 sophomore forward Marcus Lee and 6-8 junior forward Alex Poythress as mainstays. Ulis will be a sophomore next winter and Poythress will be a senior, but the latter will be coming off a torn ACL. “I probably shouldn’t say this but if Alex didn’t get hurt, it would’ve been eight [players declaring],” Calipari said. “It’s a tough thing because he would be sitting here, too. Alex comes back, he’ll graduate in three years, he’ll have his college degree and he has an opportunity to do the things he wants to do, reach his dreams.” Looking ahead to next year, Kentucky already has a three-man class highlighted by 7-footer Skal Labissieire, already projected as the No. 1 pick in 2016 by Draft Express.com. Lee is projected at No. 26 in 2016 and Poythress at No. 49. Incoming point guard Isaiah Briscoe had been projected as a 2016 lottery pick until he was recently moved out of that position. Calipari will have work to do to put a team around the newcomers and returnees, a factor that makes the next few weeks very interesting. Going into Saturday’s Nike Hoop Summit in Portland, Ore., a host of elite prospects are still considering the Wildcats. They include Our Savior New American (N.Y.) big man Cheick Diallo, Kinston (N.C.) forward Brandon Ingram, Las Vegas (NV) Bishop Gorman center Stephen Zimmerman, Callaway (MS) point guard Malik Newman and 6-foot-7 Marietta (GA) Wheeler sensation Jaylen Brown.  Newman has said he would keep an eye on how many guards leave Kentucky before making his decision. Now three are leaving. “We need to get him here,” Booker said of Newman, according to Ben Roberts. “I’m going to try my best. Malik, in my opinion, is the best player in their class. I’ve just seen him play so many times. Malik — he’s really talented, and we need to make him a Wildcat.” All of the aforementioned players except Ingram will be in New York next week for the Jordan Brand Classic, which will be Friday night at Barclays Center in Brooklyn. The NCAA late signing period begins on Wednesday. Photo: Tyler Thompson, Kentucky Sports Radio Follow Josh Newman on Twitter