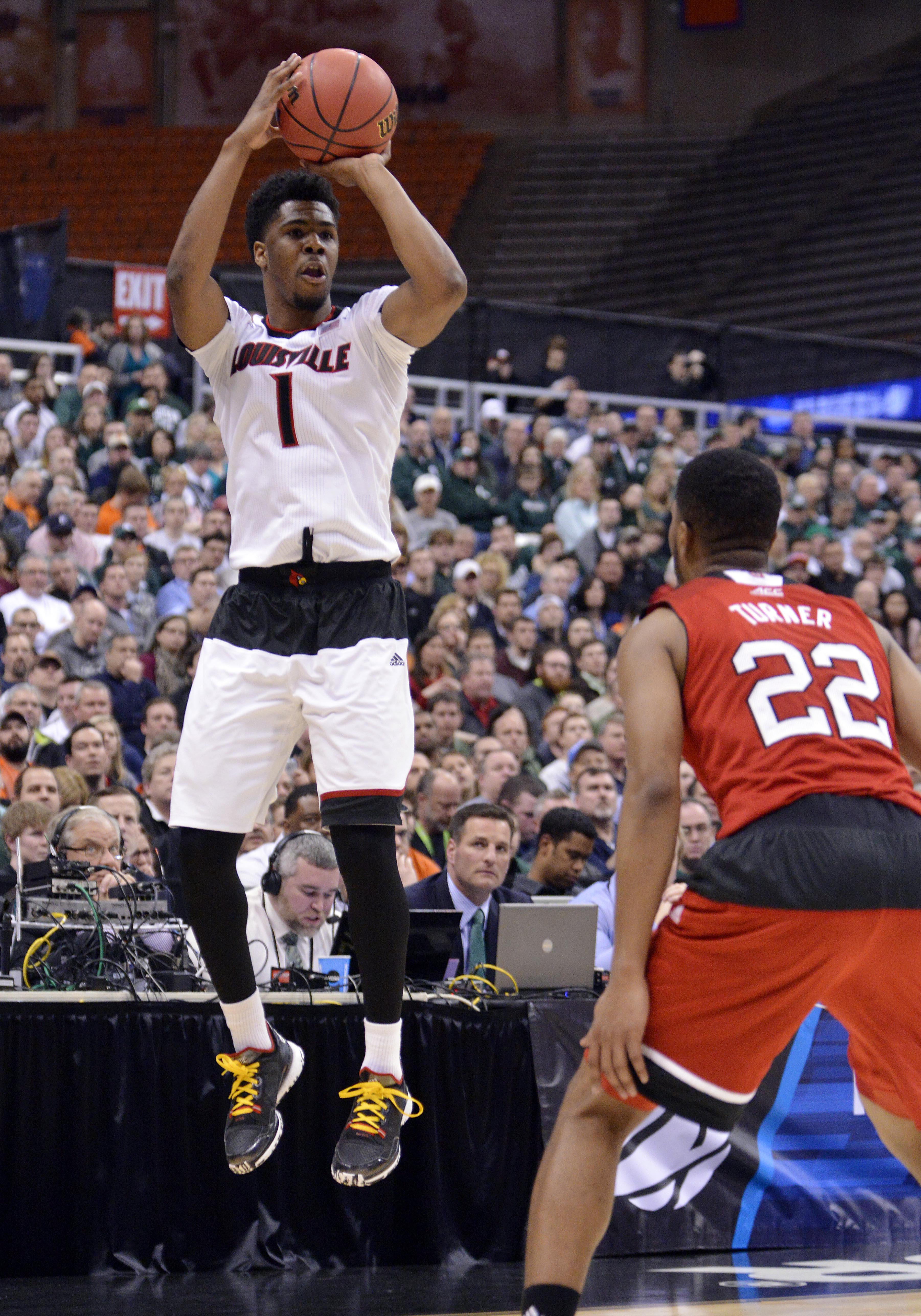 SYRACUSE — Louisville coach Rick Pitino called up sophomore Anton Gill the other day while the coach was working out and gave him a little pep talk. The 6-foot-3 guard from Raleigh, N.C., had only played 2 minutes in Louisville’s win over Northern Iowa in the Round of 32 of the NCAA Tournament and failed to score. In fact, Gill had failed to score in his last four games dating back to the beginning of March. “Son, you’re mentally in a funk,” Pitino told him. “It’s nothing you’re doing wrong because you’re playing behind Terry Rozier, who’s an unbelievable player…You’re going to get your opportunity, son.” “I got you, Coach, and I’ll be ready,” Gill replied. The opportunity came when Pitino chose to insert Gill — and not freshman Shaqquan Aaron — into Louisville’s Sweet 16 matchup with N.C. State with 8:31 remaining in a game the Cardinals trailed by 4 points. A couple of minutes later, Gill drove in and hit a short jumper and then followed that up with a 3-pointer that put Louisville ahead by 4 points with under 5 minutes to go. Gill scored all 7 of his points during a critical late run that propelled No. 4 Louisville to a 75-65 victory at the Carrier Dome and into an Elite 8 matchup with No. 7 Michigan State here at 2:20 p.m. on Sunday. The Spartans advanced with a hard-fought 62-58 win over Oklahoma in the nightcap. “I thought that little stretch right there that gave [Louisville] that cushion, was the difference in the game,” N.C. State coach Mark Gottfried said. Gill and Rozier took the game over down the stretch, scoring 17 of 19 points at one juncture as Louisville closed on a 21-13 run. Rozier played brilliantly, finishing with 17 points, 14 rebounds and 4 assists, while big man Montrezl Harrell had a gam-high 24 points with 7 boards for the Cards (27-8). “I just saw I had an opportunity,” Gill said. “We had worked hard all season, and I didn’t want to go home. By whatever means I’ve got, I just want to try to make something happen. ” N.C. State offered Gill a scholarship and was one of the first schools to recruit him, but never fully pursued him because they had Trevor Lacey coming in as a transfer. “Trevor was coming in it just didn’t work out for us to recruit him,” Gottfried said. “You can’t take everybody, we know that.” Said Gill of N.C. State: “They were one of my first offers. I had a really good relationship with coach Gottfried and coach [Orlando] Early. I didn’t even know they took Trevor…I just committed here. It felt good for me, and it’s working out for me.” Asked if getting the win over his hometown team was extra satisfying, Gill said:  “It’s kind of weird. I didn’t really realize we were playing N.C. State, my hometown team, until somebody asked me about it yesterday, because we’ve been so focused on what we need to do as a team. It’s funny how things work, and I’m just blessed to be in this opportunity.” Pitino hardly has his most talented team, but here he is in another Elite 8, with a chance to go to a Final 4. Gottfried, whose team beat Louisville earlier this year in ACC plays, says the Cardinals are better without point guard Chris Jones, who was dismissed from the team last month. “They got better, too, after Chris Jones left, which is a sign of the job [Pitino] did with his team because they improved,” Gottfried said. “And here they are sitting in the Elite Eight. Tremendous, tremendous job by those guys.” Piton wouldn’t go so far as to say his team is better without Jones, only that they are “different.” On this night, inserting Gill proved the right move for Pitino. “His reaction to my story was the reason I went with him,” Pitino said of Gill.   Photo: USA Today Sports