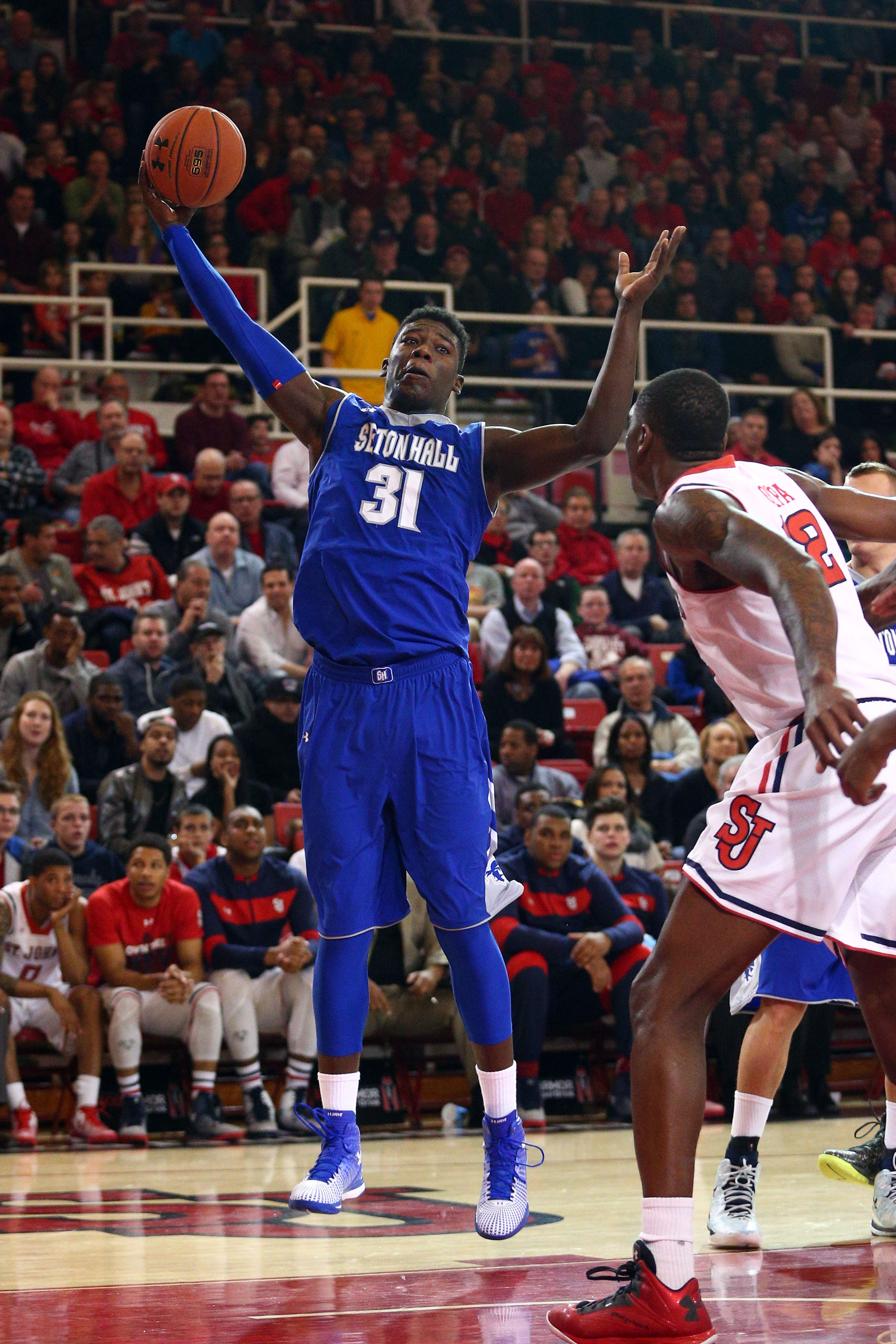 The Big East Rookie of the Year race is shaping up to be interesting. While a majority of Big East coaches told SNY.tv that Villanova’s Darrun Hilliard is their choice for Player of the Year, the coaches are split more on Rookie honors. Seton Hall’s Angel Delgado got the most votes in an informal poll, but Georgetown’s Isaac Copeland and Xavier’s Trevion Bluiett also got multiple votes. And there are still several games remaining in the regular season. Seton Hall’s Isaiah Whitehead, the Preseason Big East Rookie of the Year who has won two Rookie of the Week honors, did not get any votes. Here’s a breakdown of the three leading candidates: 1. ANGEL DELGADO, SETON HALL The 6-foot-9 Dominican native is averaging 9.2 points and a Big East-best 9.9 rebounds per game for Seton Hall (15-12, 5-10 Big East). In Big East games only, he’s averaging 9.7 points and 10.6 boards. His eight double-doubles lead the Big East. Delgado has been named Big East Rookie of the Week three times this season after winning it again March 2. He produced 13 points and 11 rebounds and scored the winning basket with 15.9 seconds left in a 67-66 win over Creighton. “He’s certainly one of a handful of guys that I think is deserving of that [Rookie of the Year] award,” said Creighton coach Greg McDermott before the Seton Hall game.  “He is relentless on the backboards, as good of a rebounder for a young person as I’ve seen in a long time. To be a good rebounder, the effort has to be there on every possession and Angel does that. You have to hit him every possession when their shot goes up, he’s a great offensive rebounder. And he’s one of those guys that will make multiple efforts. I think a lot of rebounders will make one effort, he’ll make multiple efforts to go get the basketball and his timing’s good. And he’s improved as a scorer since the season’s gone on, so he’s having a very impressive freshman year.” 2. ISAAC COPLEAND, GEORGETOWN The 6-9 native of Raleigh, N.C., is averaging 6.9 points and 3.7 rebounds for the Hoyas (18-8, 10-5). Last week he was named Big East Rookie of the Week for a second straight week and the third time overall after averaging 12.0 points, 8.0 rebounds and 3.0 assists in a pair of victories. “Isaac without a doubt I think he should be in that discussion [for Rookie of the Year],” Hoyas coach John Thompson III said. “He’s getting better every game. He’s consistently not just scoring and putting up numbers, but rebounding and putting up numbers. He’s doing a very good job defensively also. I think he’s one of the these guys that, one day the sky’s going to open up for him and the clouds are going to part and he’s going to take off. And we’re in the midst of watching that happen.’ 3. TREVON BLUIETT, XAVIER The 6-6 Indianapolis native is averaging 12.3 points, 4.5 rebounds and 1.9 assists for Xavier (18-11, 8-8). He’s won two Big East Rookie of the Week honors. “He’s had an excellent year,” Xavier coach Chris Mack said. “Like most freshman he’s not going to be our most consistent player throughout the year, but he’s grown immensely, especially on the defensive end. I think offensively he’s been pretty constant for us. He’s been a guy that we can rely on to get to the free throw line, to make shots, he’s hit some big free throws down the stretch of some big games that we’ve played. So he’s got a lot of games under his belt, he’s gotten more comfortable, I think he’s playing with more intensity. He’s a lot better player but that doesn’t make the challenge any easier.” Photo: USA Today Sports