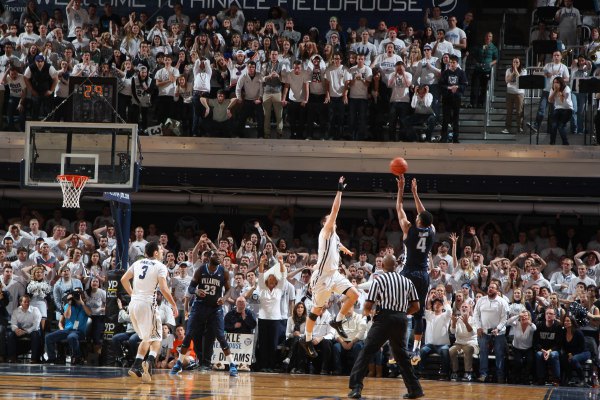 NEW YORK — With only a handful of games left in the regular season, Villanova senior guard Darrun Hilliard appears to be a virtual lock for Big East Player of the Year honors. In an informal poll of Big East head coaches, more than half told SNY.tv that the 6-foot-6 guard would get their vote. Providence’s Kris Dunn, Providence’s LaDontae Henton and Villanova’s Ryan Arcidiacono each garnered at least one vote. (Villanova coach Jay Wright cannot vote for his own player.) The Player of the Year traditionally goes to the best player on the best team and Hilliard fits that description perfectly. He’s averaging 14.7 points, 3.0 rebounds and 2.0 assists for a Villanova team that is 26-2 overall, 13-2 in the Big East and would be a No. 2 seed if the NCAA Tournament started today, according to ESPN’s Joe Lunardi. The Big East presents the Player of the Year award — along with its other honors — during the Big East Tournament March 11-14 in New York. A year ago, Hilliard shared the Big East Most Improved Player Award with teammate Daniel Ochefu. Hilliard may have helped cement the Player of the Year award on Tuesday when he went for a game-best 24 points, including 6-of-11 from beyond the arc, with 4 rebounds and 4 steals in an 89-61 dismantling of a pretty good Providence team. Hilliard guarded the 6-6 Henton in that game and held him to 12 points on 4-of-8 shooting. On Feb. 14, the Bethlehem, Pa., native went off for 31 points and made eight 3-pointers, including an open trey from the left wing with 1.5 seconds left to give Villanova a thrilling 68-65 victory over No. 18 Butler. “He’s a winner, he’s done whatever we’ve needed him to do this year to win,” Wright said Thursday on the Big East conference call. “And it always hasn’t been scoring. Last game he guarded LaDontae Henton, who I think is a candidate for Player of the Year, and did a great job on him. Other games he’s had to guard the best perimeter players. Some games, like against Butler, he hit a shot to win the game. He’s just done whatever it takes for us to win. “A couple games ago he had eight rebounds, we needed the rebounds to win the game. He’s the leader of our team, he’s our senior captain, he’s just been Mr. Everything for us and definitely a candidate for Player of the Year.” You don’t have to tell that to Butler coach Chris Holtmann, who was quick to sing Hilliard’s praises. “Darrun Hilliard can get overshadowed at times by the balance that they have,” Holtmann said of Villanova. “What more can I say. I’ve said as much as I can possibly say after he played so, so well against us this year. “I think he’s an exceptional player. I think he’s a pro. I think he’s going to have a chance to play in the NBA. I think he’s a guy that’s got great size, competes on both ends. He can make shots at a really, really high level and he makes guarded shots. Really good players make guarded shots and that’s what he does.” Tarik Turner, a former St. John’s player who has done 20 Big East games this year for FoxSports1, also believes Hilliard deserves Player of the Year honors. “His versatility as a scorer from 3 and his slashing ability stands out,” Turner told SNY.tv. “When the game’s on the line, he wants the ball. His ability to guard multiple positions really helps their team perimeter defense. He’s the leading scorer and most consistent player on the best team in the league.” Reached by phone Thursday, Hilliard said he was honored to hear all this praise. “It’s an honor, it’s an honor to be in the same breath as those coaches,” Hilliard said. “Those are some big-time coaches saying that. But again, we still have three more games left. We have road games left that are going be tough and we have a home game against St. John’s that’s going to be even tougher, so I can’t go out and just be content. I gotta come in and work every day and prove to my teammates that I’m worthy. So that’s my mindset, just proving to my teammates and answering to my teammates. If they can look me in the eye and say that I gave it my all, then I’m fine with that.” While Hilliard is Villanova’s leading scorer, they have five other guys averaging 8.9 points or better, which speaks to their balance and depth. “It’s great because night in and night out, you’re not the main focus of a scouting report,” Hilliard said. “You gotta about Arch [Arcidiacono], Dylan [Ennis], J.P. [JayVaughn Pinkston], Daniel, Josh [Hart], Kris [Jenkins], even Darryl [Reynolds. Phil Booth is stepping into his role and so it’s just easy to play like that….I think that makes it difficult on opponents, too, because they have to worry about multiple guys and not just one.” Looking ahead, Hilliard hopes to play in the NBA. He’s currently ranked as the No. 31 senior by DraftExpress.com. “Obviously, growing up you want to make it to that level,” he said. “You want to kind of see your hard work pay off. And that next step is right there, so I won’t even consider it a dream anymore. It’s kind of reality, but I just want to stay in the moment. “The NBA will always be there but these next few weeks with my brothers and this coaching staff is going to be something to remember, and I just want to go out on a great note and just kind of worry about the NBA when April comes.” Photo: USA Today Sports