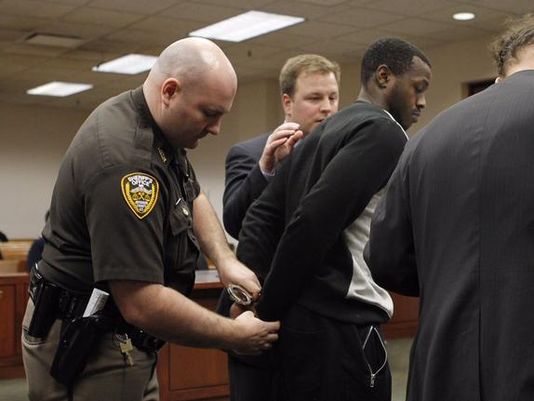 Former Louisville point guard Chris Jones pleaded not guilty Thursday to charges of rape and sodomy of two different women. Jones, 23, appeared in Jefferson District Court before Judge Sheila Collins. He was released on home incarceration instead of a $25,000 bond. From the Louisville Courier Journal:

The warrant, signed Wednesday by Jefferson District Judge Katie King, says that one of the women was hospitalized Sunday and able to identify Jones as her assailant. One of the women is 19 and the other 20, according to the warrant. A second warrant says Jones, along with two other people, forced a woman to have intercourse and oral sex. She also identified Jones as a U of L player, according to the warrant. She was taken to University of Louisville Hospital, where she was treated. Those defendants have been arrested and are to be arraigned Thursday morning in Jefferson County Jail. Jessie Halladay, a spokeswoman for the Jefferson County Attorney’s Office , identified them as Tyvon Walker and Jalen Tilford. Walker was charged with one count of rape and Tilford with one count of rape and one count of sodomy.

Louisville coach Rick Pitino dismissed Jones from the team four days ago after Jones reportedly texted his “off and on” girlfriend that he would “smack TF (the f—) out of” her after she had “messed up” his apartment. The Courier-Journal reported that the girlfriend was not one of the women assaulted Saturday. The university at that time of the first incident said there was another incident linked to Jones, but declined to release a report on it citing a pending investigation. “He’s no longer on the basketball team,” Pitino said Monday night after his team held off Georgia Tech 52-51. “He’s got to talk for himself. … Nothing I can say can remedy the situation.” Pitino added: “Mistakes were made, and sometimes in life you got to pay for those.” After the incident with the girlfriend on Feb. 17, Pitino suspended Jones for the Cardinals’ road game later that night at Syracuse, which it lost, 69-59. He was reinstated for Louisville’s 55-53 win over Miami on Saturday as he scored 17 points to go along with five rebounds in 36 minutes. A star at junior college power Northwest Florida State College, Jones was a two-time first-team NJCAA All-American and was named NJCAA Division I Player of the Year before enrolling at Louisville last season. Photo: Courier-Journal