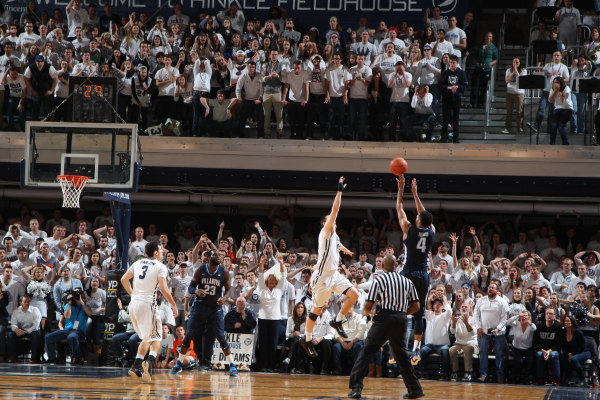 By CHRIS RUSSELL Villanova senior guard Darrun Hilliard has been named the ZAGSBLOG National Player of the Week. On Saturday, the 6-foot-6 guard had arguably his best game of his career. Hilliard scored 31 points while connecting on 8 three-pointers. When the game the came down to the wire, the senior delivered a trey with 1.5 seconds left in the contest to give Villanova a 68-65 victory at No. 18 Butler. “I guess I played very good,” he told reporters. “Obviously there are some improvements I can make. Offensively, I was getting open looks and my teammates did a good job of getting me the ball, setting screens. They did the hard work.” On Wednesday against Providence, Hilliard scored 16 points in a 74-68 victory. Hilliard is averaging 14.1 points and 3.0 rebounds for Villanova (23-2, 10-2), which has positioned itself at the top of the Big East conference standings. Next game: Tonight vs Seton Hall @ 7 PM OTHER NOTABLE PLAYERS Sir’Dominic Pointer, St. John’s – The senior forward scored 24 points in Saturday’s crucial road victory at Xavier. Pointer has been one of the most consistent players in the Big East, averaging 12.5 points and 7.5 rebounds per game. Saturday’s victory elevated the Johnnies to a 17-8 mark on the season and more importantly, the Red Storm currently sit as the “First Four On” in the latest ESPN bracketology. On Tuesday, Pointer scored 15 points, grabbed 11 rebounds and blocked five shots in a 86-78 victory over DePaul. Next game: Feb. 17 at Georgetown @ 7 PM Christian Wood, UNLV – In the absence of freshman Rashad Vaughn, who is out due to a torn meniscus in his left knee, Wood posted a career-high 31 points and grabbed 9 rebounds to go with 5 blocked shots in a loss to Air Force 76-75 on Saturday. Wood has been on a tear as of late. On Tuesday wood scored 27 points and tallied 19 rebounds against Fresno State. Next game: Feb. 18 vs Boise State @ 11 PM Norman Powell, UCLA – The senior from San Diego has helped UCLA sneak its way back into bubble talk by winning eight of 11 games. In the latest bracketology, the Bruins sit in the “Last Four In” category. The 6-foot-4 guard scored 23 in Saturday’s victory over Oregon. Powell has scored 20 or more points on 10 different occasions this season. The Bruins currently sit in a second-place tie with Oregon in the Pac-12 standings. For UCLA to solidify itself in that second-place spot, Powell’s leadership will have to lead the way the rest of the season. Next game: Feb. 18 at Arizona State @ 9 PM A.J. English, Iona – In the final moments against conference rival Manhattan on Friday night, Iona head coach Tim Cluess looked no further than his talented junior lead guard. English connected on a contested 3-pointer, giving the Gaels a 68-65 lead with 32 seconds left. English finished with 22 points on 7-for-14 shooting, including 6-for-9 from behind the arc in 40 minutes of action in a road victory over the Jaspers. “As much confidence as I have in anyone,” Cluess said. “A.J. [English] has been our best player in making shots since I’ve been here in Iona.” Sheldon Jeter, Pittsburgh – The transfer from Vanderbilt scored a career- high 22 for the Panthers on Saturday en route to an 89-76 victory over No. 12 North Carolina. The sophomore is starting to get accustomed with his role. The last three games, Jeter has averaged 15.3 points. That is a big increase considering the 6-foot-8 forward had only scored in double figures just once this season. Next game: Feb. 16 at Virginia @ 7 PM Photo: Villanova Athletics Follow Chris on Twitter