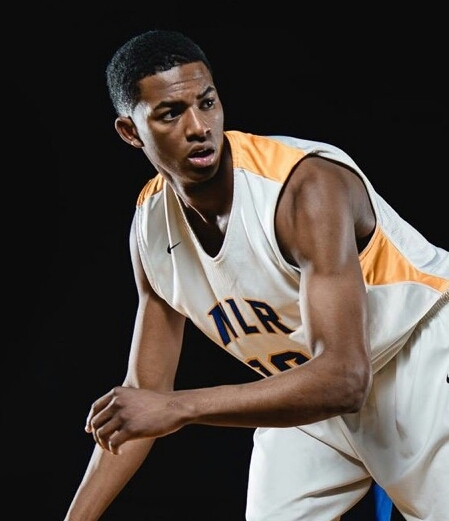 By CHIP MILLER NORTH LITTLE ROCK, AR — Adrian Moore is one part of a triple-threat guard attack at North Little Rock (AR) High School, but the 6-foot-4 2016 shooting guard realizes that the end of the season means an end to a part of his daily life. “I have been playing with them [K.J. Hill and KeVaughn Allen] ever since I started the game of basketball,” Moore said. “I know it’s our last year and I’m probably going to be really sad. I really don’t get sad over stuff like this, but these are guys that I grew up with and we’re all brothers and we do everything together. They’re all going to be gone and I’m still going to be here another year. I still have a lot of friends in my grade and below but it’s not going to be the same, I can tell you that.” Moore continues to work on every aspect of his game. “Basically everything, the 5 a.m. workouts, we’re just doing a lot of guard work and working on trying to bring the ball down and when you have pressure on you, making it where you control the defender and you can make them do whatever you want, learning how to put him on his heels and get to the rack,” Moore said. “Working on the pull ups and threes, everything really, just guard work. Working on defense. Working on strengthening my legs so when I am sliding on defense I can slide and cut the guy off real easy.” On the recruiting front, Moore said the pace has really picked up. Currently he holds two offers with multiple schools looking to get the shooting guard on campus. “Tulsa and Wake Forest are the official offers,” Moore said. “Just a lot of coaches calling in and showing a lot of interest.” The Wake Forest offer was a special one For Moore, and maybe more special for his father. “That was on Father’s Day actually, which was really cool because my dad was really excited, I think more than me,” Moore said while laughing. “Coach [Brett] Ballard called me and was talking to me about the program and everything and he said, ‘Coach Manning was right beside me and he wanted to talk to me.’ So as soon as he [Danny Manning] got on the phone he was like, ‘Adrian I love your game. I saw you in the summer and I want to let you know right now that you do have an offer.’ As soon as he said that, I almost dropped the phone because that was my first time ever hearing those words. It was pretty exciting and nerve racking. I loved it!” As far as what Moore likes about Wake, he said: “The thing is with Coach Danny and his staff, they’re young and they are not really new to the game but new to coaching so they understand what the kids are going through. The game of basketball has really changed and I think they’re in that same era I am kind of in. But I really like the way they play the game of basketball, how they coach it, what they want their players to do, I really like that. Plus it’s Danny Manning. He has a lot of experience with the game of basketball so he knows the right places to put you in to help you succeed at the game of basketball.” Moore said Tennessee had really picked up their recruitment. Previously at NLR to see Allen, Moore became a target for the Volunteers. “I actually have [paid attention to them], because the last coaching staff they had [Cuonzo Martin], they were there a couple of years ago but they recently moved to California,” Moore said. “They were recruiting me but then a new coaching staff came in and I guess they had a whole bunch of recruits and they finally came back to me. I don’t know a lot about the program, but I am doing my research. Hopefully if I go up on a visit I will get to know them a lot better like I am with Wake Forest and Tulsa and these guys that are contacting me. Hopefully good things come out of it.” Other schools continue to get involved in Moore’s recruitment. Dennis Moore, Adrian’s father, said they are hearing from LSU, Georgia, Wichita State, Baylor and Iowa along with Tulsa, Tennessee and Wake Forest, on a consistent basis. Iowa assistant coach Sherman Dillard is the most recent to see Moore, showing up unexpectedly at North Little Rock recently. As far as visits, Moore said they’re looking to plan several trips. “Tulsa, they wanted me to get in actually on January 5th, but there was a lot of ice up there for their game when they played Houston,” Moore stated. “Wake Forest is trying to get me down for a visit soon for one of their basketball games. Arkansas, I don’t know when I am going up there, I think I am going pretty soon. Coach has been talking to me and my dad trying to get us up there. Tennessee, they are one of the newest ones that’s been recruiting me really hard, sending letters almost every day and stuff, so they are trying to get me up there to see one of their games. I’ve been up to Knoxville and the campus was really beautiful and I really like it up there. It’s pretty exciting going to their games.” Dennis Moore said they are looking to schedule a visit the weekend of Jan. 31, but a location has yet to be finalized. Moore will play with the Under armor Summer team of Louisiana Elite, the former team of recent St. John’s commit, four-star shooting guard Brandon Sampson. Follow Chip Miller on Twitter Follow Adam Zagoria on Twitter And Like Zags on Facebook