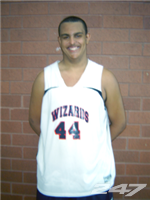 By MATT JESSEN-HOWARD Winter recruiting is always full of new names and interest, and one of the hottest names in the country right now is Huntington (Va.) Prep’s Levi Cook. The 6-foot-10, 300-pound senior center has leveraged a successful high school season and a slimmer body to the uptick in his recruitment. “The high school season’s going real well,” he told SNY.tv in an exclusive interview. “We’re 21-2 I think, and I’m playing really good personally. We’re just hungry for a national championship. I’ve been working on getting in better shape and my conditioning. I’ve also been working on improving my skills in every area. I’m starting to get in shape and starting to feel better. Since I came here, I’ve lost 25-30 pounds. My target weight is about 260 or 270.” Several high-major schools have been calling and visiting the former West Virginia commit recently. “Michigan’s involved now, and I’m sure some more new schools will get involved,” he said. “Pitt, Virginia Tech, Drexel, and have all offered me. App. State and East Tennessee State have offered and are recruiting me hard too.” Cook told SNY.tv that Pitt, South Carolina, and Virginia Tech were the schools recruiting him the hardest. The Rivals.com three-star visited Virginia Tech on Thursday to watch them play Duke. He’ll be in Columbia this weekend for an official visit, and is working on setting up other visits, as well. “I’m taking an official visit to South Carolina this weekend. I’m also trying to set up visits to Pitt and Missouri,” he said. He noted that his relationship with the program’s coaches will be a key factor in his recruitment, but for now, he’s just focused on winning a national championship with Huntington Prep. “I haven’t really thought about when I want to make a decision. I’m just really focused on the season.” — Breaking down his interest in some of the schools: Drexel: “Drexel was the first school to offer. I’m definitely the first choice for them. I like loyalty.” Michigan: “The thing about Michigan is that they called my coach because they need to see my transcripts, but they’ll offer within the next week or two.” Pitt: “I talk to Pitt all the time. They need a big, and I think I can be that for them. Coach [Jamie] Dixon and all of his assistants are just really cool people, and I like them a lot. They just want me to eat for them, go out there and play center and help them win.” South Carolina: “Coach [Frank] Martin and Lamont Evans are cool as can be. I like them a lot.” Virginia Tech: “I really like Coach Buzz [Williams]. He’s a cool guy. Coach Roccaforte is a great guy too. All the coaches there are great people.” Follow Matt on Twitter