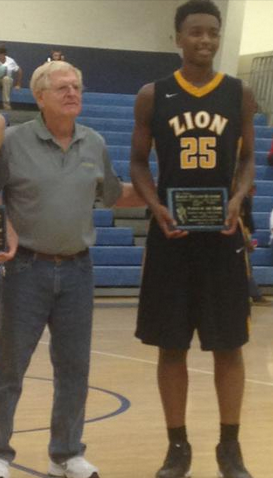 By JACK LeGWIN PUNTA GORDA, Fla.– This year’s edition of the ninth annual Wally Keller Classic featured a slew of talent from the Southeast which included Montverde, Oak Ridge, Pebblebrook (Ga.), Zion Lutheran, Tampa Prep, Bartow, Godby, Potters House Christian, St. Petersburg Gibbs, and many others. Here is a recap of the best that the Classic had to offer. Best Individual Performance– Keith Stone – Zion Lutheran – The Florida Gators signee set the WKC scoring record with 42 points in an 81-31 drubbing of the hometown team, Charlotte High School. At 6-foot-8, Stone gets to the rack with ease, and has the length to finish over almost anyone. His midrange has improved tremendously, and he is having an incredible season for the top team currently in 2A. MATCHUPS- Juwan Durham vs. Antonio Blakeney – While playing different positions, Durham and the LSU-Bound Blakeney often exchanged baskets in the OT battle between Tampa Prep and Oak Ridge. Durham had the better game with 35 points, but Blakeney put up 5 early points in OT, to add to his total of 20 which sealed the 64-61 win for Oak Ridge. Durham recently updated his recruitment on ZAGSBLOG last week.  Udoka Azubuike vs. Zach Brown – The matchup of Potters House and Miami Beach pitted the top two ranked big men in the state against each other. However, you could say it disappointed slightly. Azubuike registered 8 points and Brown didn’t score a single point. While neither is extremely skilled, Azubuike got the better of the matchup off of pure strength, and Potters House pulled out the win 44-39 in a grind-it-out game. Biggest Upset- Bartow– 70 Pebblebrook (Ga.)– 67- Tony Bradley led the charge for the Yellowjackets in the enormous upset of nationally ranked Pebblebrook scoring 23 points, and putting in some clutch baskets when it mattered. McKinley Harvin and Tre Jordan came up big in the second half in the comeback win for the Polk County power. Bradley said recently that he has four schools working hardest at the moment.  The Class of 2018 is loaded in Florida currently. Five top players from the class of 2018 played at the WKC, and showed that they belong in the high major discussion. Players to watch from 2018: E.J. Montgomery – Montverde Academy- The 6-foot-9, almost 6-foot-10 lefty forward started the Eagles game against St. Pete Gibbs, and while he didn’t pile up points he was very effective in the minutes he logged. Playing behind the No. 1 player in the country in Ben Simmons, has helped Montgomery improve quite a bit over the past couple months. He played for Atlanta Celtics this past summer. Montgomery is currently ranked No. 4 in the class of 2018 by ESPN. Emmitt Williams– Lehigh- At 6-foot-7, Williams has an incredible motor and no doubt will be a force in Florida for years to come. A rebounding machine, his frame and ceiling is unmatched in the state at the moment. He has the potential to end up a top three player in the state. He is currently ranked No. 5 in the state by SourceHoops.com. Jacob Tracey– Cape Coral Mariner- At 6-foot-4, Tracey is built much like a younger version of Orangeville (Can.)’s Jamal Murray. A big point guard, Tracey at first glance would show to be an athletic and decisive scorer, but he is quite the opposite. Tracey plays under control and can play at multiple speeds. He can shoot it from deep too. While he didn’t have a great game on the stat sheet against Godby, he has the potential to be a very special player in 2018. He told SNY.tv after that he is intending to play for Nike Team Florida’s 16U squad during the summer. Two other players to keep an eye on are Michael Devoe from Oak Ridge, who ran the point in the absence of two of Oak Ridge’s starters. A lanky lefty, Devoe has a very high ceiling. The other player to watch is Cape Coral Mariner’s Jahmel Myers. At 6-foot-6, Myers won the MVP in the loss to Godby, a very productive and effective player, he is one to keep an eye on for years to come. Other Notable Performances: Kansas State signee Barry Brown scored 32 in a loss to Montverde. The No. 1 player in the nation, Ben Simmons, scored 26 in a win over St. Pete Gibbs Godby is still undefeated heading into the latter part of the season with a 20-0 record, after a 48-41 win over Mariner. Follow Jack on Twitter