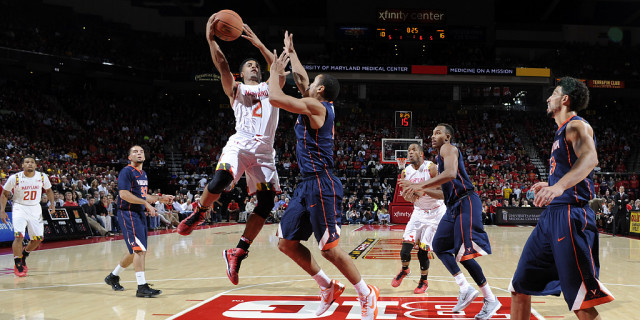 By CHRIS RUSSELL Melo Trimble of Maryland has been named the ZAGSBLOG National Player of the Week. On the week, Trimble led the Terrapins to back-to-back conference wins over Rutgers and Michigan State. The freshman torched the Spartans on Saturday with five 3-pointers and 24 points. “I’ve seen Melo do that many times, and it doesn’t shock me,” Maryland head man Mark Turgeon said. Jake Layman had 23 points and 12 rebounds in the game, but Trimble made seven of 11 shots in the first half, including five-for-seven from beyond the arc. “I have to say he’s the straw that stirs the drink,” Michigan State coach Tom Izzo said. “He gets other people involved. Once in a while, he’s almost casual out there. He doesn’t really look to do much. He just gets people involved. He’s as good as I’ve seen in a while.” On the season, Trimble is averaging 16.1 points, 4.0 rebounds and 3.0 assists per game. The 6-foot-3 guard earned a spot on the Wooden Award Midseason Top 25 Watch List and looks to play a vital part of the Terrapins success this season. Trimble is currently projected as the No. 18 pick in the 2016 NBA Draft by DraftExpress.com. Next game: Jan. 22 at Indiana @ 9 PM OTHER NOTABLE PERFORMANCES Malcolm Brogdon, Virginia — The 6-foot-5 guard went for 20 points in Saturday’s 66-51 win over Boston College, including 3-for-6 from deep. Four days earlier, Brogdon scored 16 points, hitting 3-of-3 from the arc, in a 65-42 beatdown of Clemson. Next game: Jan. 22 vs. Georgia Tech @ 8 PM Jahlil Okafor, Duke — The projected No. 1 pick helped halt a two-game losing streak by scoring 14 of his 18 points in the second half Saturday in a 63-52 win at Louisville. Amile Jefferson added 19 as Duke handed Louisville its first double-digit loss in three years. Okafor went for 15 points and 15 rebounds in the 90-74 loss to Miami: Next game: Jan. 19 vs. Pitt @ 7 PM Jerian Grant, Notre Dame – Amidst the suspension of starting forward Zach Auguste, Grant put the Fighting Irish on his shoulders in back-to-back conference victories over Georgia Tech and Miami. On Saturday versus Miami, Grant posted 23 points on 8-for-10 shooting while dishing out eight assists in 38 minutes of play. The senior from Bowie, MD has been a key contributor for No. 12 Notre Dame as they currently post a 17-2 record. Next game: Jan. 22 at Virginia Tech @ 7 PM Brad Waldow, St. Mary’s – One of college basketball’s best kept secrets is Waldow. On the week, the senior forward averaged 24.5 points and 10.0 rebounds per game while leading the Gaels to back-to-back conference victories over San Diego and Bringham Young. Waldow’s attributes have been substantial in St. Mary’s current 9-game winning streak. On the season, the 6-foot-10 Waldow is averaging a double-double in 20.6 points and 10.1 rebounds per game. Next game: Jan. 22 at Gonzaga @ 11 PM Tyler Haws, BYU – On the week, Haws put on an offensive clinic, averaging 27.0 points, 5.5 rebounds and 3.0 assists per game. On the season, the 6-foot-5 senior from Alpine, UT is one of the nation’s leading scorers, averaging 22.5 points. Next game: Jan.24 at San Diego @ 4 PM Buddy Hield, Oklahoma – The junior from Freeport, Bahamas had a video game performance by scoring 27 points on a perfect 10-for-10 shooting, including 4-for-4 from behind arc, in Saturday’s key victory over crosstown rival Oklahoma State. On the week, Hield averaged 24.0 points and 6.5 rebounds per game. Next game: Jan. 19 at Kansas @ 9 PM Stanley Johnson, Arizona – The freshman sensation led the Wildcats to back-to-back conference victories against Colorado and No. 8 Utah. On the week, Johnson averaged 20.0 points and 8.5 rebounds per game. On Saturday, Johnson posted all 18 points and 9 rebounds in the second half, keeping the Utes at bay. According to Draftexpress.com, the former McDonald’s All-American is projected as the No. 8 in the 2015 NBA Draft. On the season, Johnson leads the Wildcats in scoring (14.6) and rebounding (6.8). Next game: Jan. 22 at Stanford @ 9 PM Follow Chris on Twitter

With Booker Projected as NBA 1st-Rounder, Briscoe's Playing Time Could Open Up at Kentucky