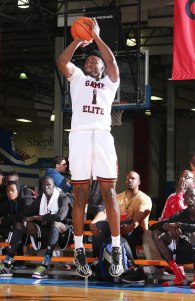 After initially telling SNY.tv he planned to take official visits to Michigan and North Carolina, Jaylen Brown reiterated his plans this weekend. “I can’t remember the date right now, January something,” Brown told Scout.com. “I’m going to go to Michigan and North Carolina. I’m definitely taking a visit to those two schools.” Evan Daniels reported the 6-foot-7 small forward from Marietta (GA)  Wheeler will visit UNC. Tar Heels coach Roy Williams was in the stands at the City of Palms, watching Brown go for 19 points Saturday in a win over Paul VI. “I grew up a UNC fan,” Brown told Scout. “I always loved the Tar Heels growing up. I remember watching Tyler Hansbrough’s team, Ty Lawson and Danny Green. They had a stacked team. I fell in love watching that team. Ever since I’ve always liked them. As you get older things change of course it’s not about who you like growing up, it’s about what fits you. But growing up I was always a Tar Heel fan.” As previously reported by SNY.tv, Brown has family connections to Michigan. “My family is from Michigan,” Brown said.” I have a lot of people in my family that went to Michigan and other people went to Michigan. Coach [John] Beilein guy is real cool. I met him at Wheeler and talked to him for a while.” Brown is also considering Kentucky, Kansas, UCLA, Georgia and Georgia Tech, but only Williams, Georgia’s Mark Fox and Georgia Tech’s Brian Gregory have seen him this year as far as head coaches go.